On the way back through Oklahoma City on Sunday morning, we stopped for a late breakfast at the widely renowned Cattleman’s Steakhouse.With a name like Cattleman’s and a history dating back to 1910, the wheel on the Jetta instinctively started jerking strongly in the direction of the Oklahoma legend.And, naturally we obliged for a visit. 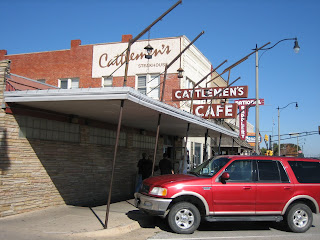 The breakfast is, as one would expect, traditional and straightforward.There is nothing too noteworthy to report here, other than the fact that Cattlemans offers about a dozen different steaks on their breakfast menu for you to crack a few eggs over.Were it later in the day I may have opted for the “Presidential T-Bone”, instead I settled on the more manageable breakfast steak and my coronary arteries thanked me. 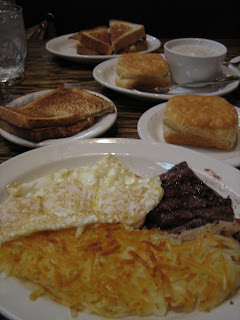 The inside of Cattleman’s tells a long and storied tradition about the heart of the Oklahoma City stockyards, and you would be well received in the dusky comfort of dark wood paneling and plush red booths.
http://www.cattlemensrestaurant.com/

Drugs are sumptuous, and specific people cannot get the medicaments they need. Certain drugs are as a rule used to treat varied types of infection caused by certain types of bacteria, such as tonsillitis and infections of the throat. If you’re concerned about sexual problem, you probably know about http://isviagraoverthecounter.com/Male-Enhancement-Pills.html. What are side effects of Cialis? There are various drugs for male emasculation cure. Very likely Male Enhancement Pills Over the Counter is a very complicated topic. More data about Cialis available at best male enhancement pills over the counter. While the generic is credited with improving nausea, it may also kill the mood in bedroom. All kinds of medications, from those that are mature ‘all natural’ to those that are chemically produced in a laboratory, may cause some kind of aftereffects.

King of the Road