After braving the logjam of traffic getting off highway 77 (this was easily the largest game in Columbia in recent history) I slid into a parking space in one of the many warehouse parking lots in this industrial part of town, and began hoofing it over to the stadium area to check out another ballyhooed SEC tailgating scene.

The first stop to be made was over to the fabled South Carolina “Cockaboose Railroad” to have a glimpse at one of the most unique tailgating attractions in all of College Football. A mere fifty yards from Williams Brice stadium, you will find twenty two Gamecock garnet colored Cabooses occupying an abandoned stretch of railroad track. The “Cockabooses” have been completely renovated, and come complete with power, sewer, running water, roof decks, and a host of lavish interior appointments. Forget about your pop out RV, this is how tailgating is done in style. 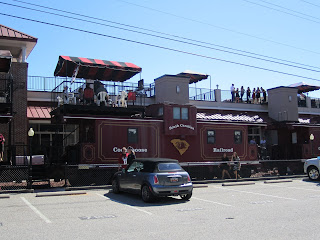 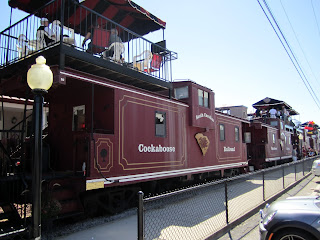 In keeping with the gracious SEC hospitality I have encountered thus far, a very kind woman noticed my gaping jaw and invited me to have a look inside Cockaboose #10. Once inside, I was greeted by Hank, the owner, a dentist from Gaffney and proud South Carolina alum. After introducing me to his family, we exchanged pleasantries for a few minutes and talked about the upcoming game before I had to leave. On my way out, Hank offered his handshake and business card, telling me if I ever found myself in the area again, to stop on by for a visit. It’s this kind of genuine hospitality, to complete strangers, that make folks like Hank such a pleasant part of my College Football travels. 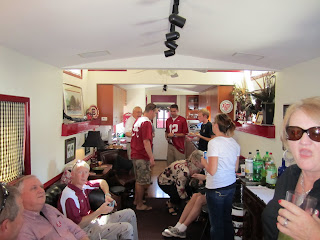 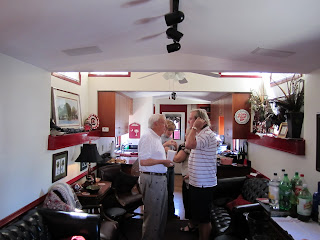 Following my tour of the Cockaboose railroad, I headed over to meet up with some of our favorite folks from the College Football tour in 2009 for a remarkable reunion tale. We met Lloyd and Cameron last season during our trip to Arkansas while hoisting a few beers in the Hog Haus Brewery in Fayetteville. Loyal South Carolina followers, they had made the trip out to watch the Gamecocks play the Hogs that day. After exchanging stories for a couple of hours, Lloyd told us that if we ever found ourselves in Columbia, we had a tailgate waiting for us. I bet he never thought I would actually take him up on that…

After learning I was going to Columbia, Lloyd and I exchanged a few emails including directions to his tailgate spot and the promise of a beer only a stones throw from the stadium. True to form, I was greeted warmly by Lloyd along with an ice cold Yuengling and some sliders he painstakingly handmade that morning. We spent the next hour and half hoisting a few more Yuenglings, chatting about my travel schedule for the year, meeting various new friends at the tailgate, and postulating on the Gamecocks chances. Finally, I got a chance to meet the rest of Lloyds family that we had heard so much about, and they were all equally pleasant. 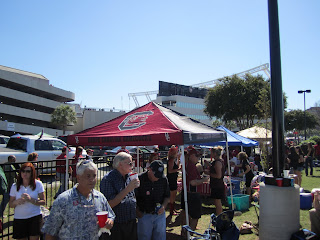 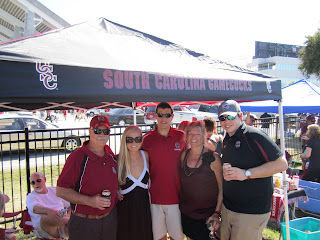 My only regret was not being able to hang around the tailgate longer, all the folks (Alabama fans included) were incredibly nice and welcoming. Lloyd himself has the rare gift of being a remarkable storyteller, so an afternoon can pass rather quickly around him, and I was almost sorry to head into the stadium.