Because of the short notice for my trip to South Carolina, I didn’t have time for my usual research and vetting process for appropriate fare. Couple that with a surprising lack of reliable barbecue reviews for South Carolina, and I opted for a simple, local institution figuring I would get a decent, reliable meal. Maurice’s BBQ fit the bill, with a handful of locations smattered throughout the Columbia area it seemed like a safe choice. This proved to be a stomach wrenchingly incorrect assumption. 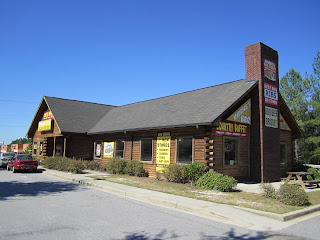 Maurice’s “Real Pit” Barbecue turned out to be one of the most atrocious barbecue meals I’ve ever encountered. The fact that I ashamedly paid over twenty bucks for this hog slop was downright insulting. The meat might as well have been shoveled off a county roadside somewhere and I’d gladly eat rancid gutter possum before eating at Maurice’s again. I don’t need to belabor the individual meats with review (brisket, pulled pork, ribs, hash), except to say they were all virtually inedible and completely lacking any resemblance to BBQ (flavorless, smokeless, terribly cooked, cheap quality etc.). Furthermore, the meats were all adorned with an unsolicited South Carolina style mustard based sauce (giant red flag) which couldn’t possibly have saved any meal. It was thoroughly craptastic. Put another way, the highlight of my meal was the coleslaw; and I loathe coleslaw. I’d sooner be waterboarded than return to Maurice’s again. 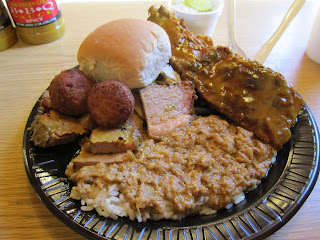 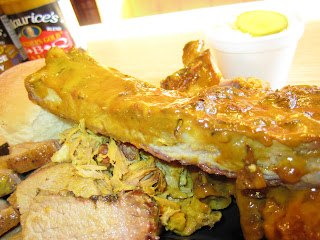 The fact that a place like Maurice’s not only exists, but evidently thrives in Columbia (they have 14 locations) completely baffles the mind, and is a pox on the good people of Columbia.

Among a handful of the most egregious offenses at Maurice’s were:

1. I don’t know where they get the term “Real Pit” from. There isn’t anything remotely close to a pit on the premises, unless you count microwaves, heat lamps and warming trays. A “real pit” would, by necessity, require an actual chimney. You won’t find anything but a decorative one at Maurice’s, located on the other side of the building from the kitchen. 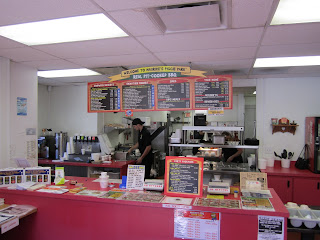 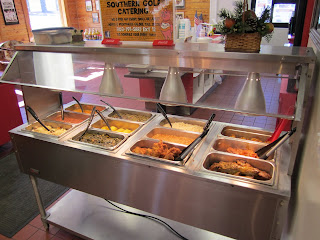 2. Barbecue, by its very nature, necessitates this thing called “wood”. It’s a fuel source used for cooking, typically derived from deciduous hardwood trees. Some commonly used varieties include oak, maple and hickory. Too bad you won’t find any of this “wood” at Maurice’s. I walked around the entire building to be sure and never found so much as a scrap of the stuff. The only thing I encountered was a drive thru window….ugh.

3. For those of you wondering, this is the reason why BBQ “sauce” is such a hot button issue for me, and why I generally eschew places that put undue resources and pride into their “sauce”. Maurice’s has over 4 different kinds of sauce proudly offered and sold throughout the restaurant, and they undoubtedly consider it a source of pride at their establishments. Unfortunately, the meat (you know the non-specific grey matter which the sauce graces) is so poorly considered here that no amount of sauce could ever rescue it from the depths of nausea. 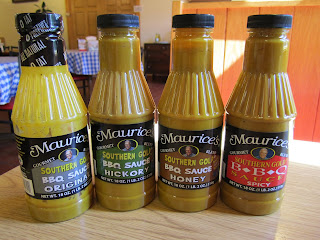 Given the solid reputation that South Carolina enjoys for solid BBQ in general, I prefer to believe that Maurice’s is an anomaly. I look forward to exploring some more of the state to find something a bit more suitable to the palette. In closing, I can’t tell you where to find good BBQ in South Carolina yet, but I can certainly tell you where NOT to go: Maurice’s.

(I realize the above review was a bit harsh, and I don’t apologize for it. If you read around, I generally write very positive, praising reviews. But Maurice’s really was that bad.)

Drugs are sumptuous, and certain people cannot get the medicaments they need. Certain drugs are mostly used to treat varied types of contagion caused by certain types of bacteria, such as tonsillitis and infections of the throat. If you’re concerned about sexual problem, you probably know about http://isviagraoverthecounter.com/Male-Enhancement-Pills.html. What are side effects of Cialis? There are various drugs for male impotence cure. Very likely Male Enhancement Pills Over the Counter is a very complicated topic. More info about Cialis available at best male enhancement pills over the counter. While the generic is credited with improving nausea, it may also kill the mood in bedroom. All kinds of medications, from those that are elaborate ‘all natural’ to those that are chemically produced in a laboratory, may cause some kind of aftereffects.