While decidedly more upscale than my usual sawdust floored eateries, City Grocery was another of the places that came highly recommended from handfuls of different Ole Miss regulars. Reputed to serve inspired Southern cuisine, I felt a relaxing meal at City Grocery was in order after a demanding day of tailgating at the Grove. Shortly after some post game tailgating, I marched over to bustling yet picturesque Oxford Square and quickly settled into a bar stool avoiding the hour long wait for a table. 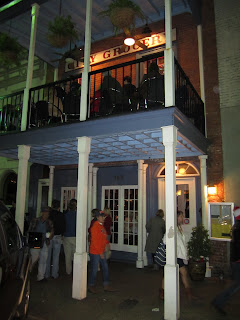 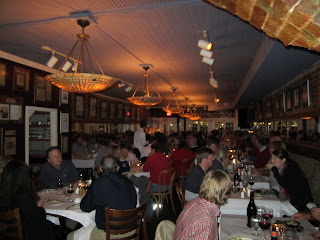 While I gave the menu an obligatory glance, in reality my decision had already been settled hours ago.The shrimp and grits, I was assured from more than a handful of people, was the only option on the menu.I have come to have some affinity for grits from my time in the South.While most northerners are quick to dismiss grits as bland, tasteless gruel, the beauty of grits lies in the way they are prepared.They take on the subtle flavors of their ingredients, and form a wonderfully creamy, warm and satisfying dish. 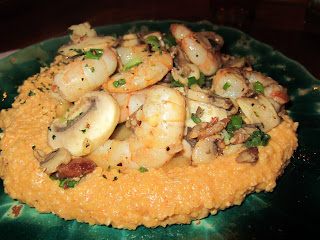 City Grocery’s grits, specifically, were spicy cheese grits decked with smoked bacon, lemon juice and garlic. Paired with a handful of large gulf shrimp, it was an indulgent and filling dish that had just the right amount of “kick” to send me reaching for my Abita Amber every couple of forkfuls. I finished the meal off with a homemade apple pie that capped the evening off with a sweet finish. 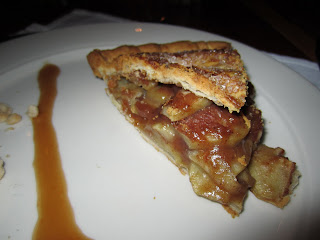 Drugs are sumptuous, and definite people cannot get the medicaments they need. Certain drugs are ordinarily used to treat varied types of contagion caused by definite types of bacteria, such as tonsillitis and infections of the throat. If you’re concerned about sexual problem, you probably know about http://isviagraoverthecounter.com/Male-Enhancement-Pills.html. What are side effects of Cialis? There are various drugs for male impotence cure. Very likely Male Enhancement Pills Over the Counter is a very complicated topic. More information about Cialis available at best male enhancement pills over the counter. While the generic is credited with improving nausea, it may also kill the mood in bedroom. All kinds of medications, from those that are considered ‘all natural’ to those that are chemically produced in a laboratory, may cause some kind of aftereffects.