Originally founded in the mid 1930’s, the Hamburg Inn #2 was one of three different burger joints (#1 and #3 have since closed) opened up in Iowa City by the Panther Brothers, and has grown to landmark status since that time. In addition to being an Iowa City icon, Hamburg #2 has garnered national celebrity with their “Coffee Bean Caucus” for presidential election cycles. During the Iowa Caucuses, visitors to the ‘Burg are allotted coffee beans to drop into mason jars with selected candidates names on them. Many presidential nominees have visited the Hamburg Inn to garner Iowan support, claiming such noteworthy visitors as Ronald Reagan and Bill Clinton. 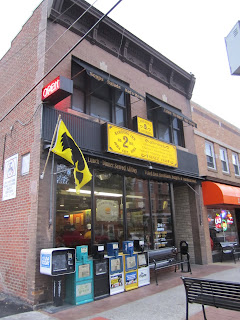 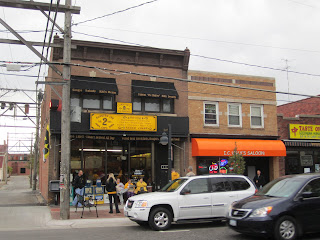 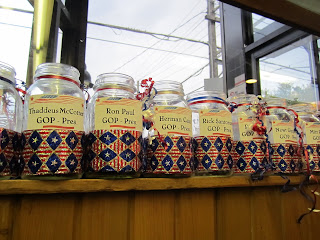 Despite its namesake, I was told by a handful of reputable sources that breakfast was the real attraction at the Hamburg Inn #2. As such, I lined up an early Sunday morning visit to avoid the church crowds piling in after service. What I discovered may be one of the best breakfast encounters I’ve ever had. 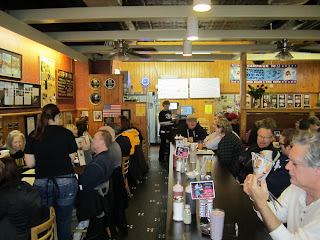 Putting the aforementioned partisan politics aside, I was there to sample their breakfast lineup, but a glance at the menu quickly diverted my attention to a featured menu item called the “Pie Shake”. Deceptively simple, the “pie shake” is simply a standard milkshake made with your choice of a slab of their homemade pie tossed in. Somehow, I had made it 32 years on this planet without so much as hearing of a Pie Shake, never mind trying one, and my sheltered existence was about to be turned on its face.

Despite the tempting array of various fruit pies, I opted for the Red Velvet “Cake” Shake, which, according to the waitress, was one of their best sellers. It arrived a few minutes later, flecked pink in color topped with whipped cream and a cherry, filled into a tall sundae glass, the remaining contents loaded into the accompanying steel mixing cup. And quite simply, it was glorious. As a purveyor of shakes, this was absolute Red Velvety perfection in a glass. Whatever your predispositions about proper breakfast fare may be, anytime of day would be appropriate for one of these, and only a chump would opt for coffee instead. 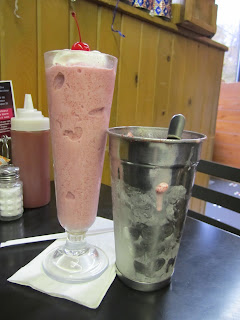 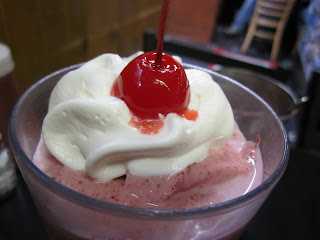 The breakfast itself was equally indulgent and delicious. Opting for a traditional corned beef hash and eggs, I was awarded an extra chicken fried steak after a mix up by the waitress. Oddly, I didn’t protest. Traditional and simple, there is a subtle art to a basic breakfast. The hash had a crispy crust browned to perfection, while the chicken fried steak had a crunchy battered shell giving way to fork tender pounded steak inside. I alternated savory bites of salty breakfast meats with sips of the creamy sweet red velvet shake. It was everything that you could want from a simple, old school diner breakfast. Nothing more, nothing less. 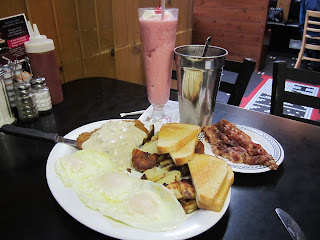 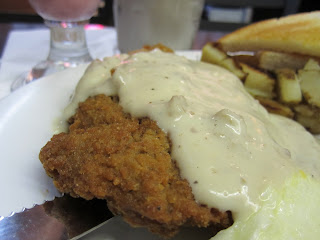 In the end, the Hamburg Inn #2 is about as close to breakfast perfection as you can get. It’s rich in history and has all the authentic charm of a quintessential main street café’. During that history, they’ve had time to master the basics – the food is unpretentious yet perfectly prepared, free of any superfluous adornment. Finally, the “Pie Shakes” are one of America’s great undiscovered food secrets. If I were running for President, they would be decreed mandatory fare on every diner menu from coast to coast. I’m sure even ole Bubba Clinton and Ronald Reagan could agree on that platform…

Drugs are sumptuous, and definite people cannot get the medicaments they need. Certain drugs are mostly used to treat varied types of infection caused by certain types of bacteria, such as tonsillitis and infections of the throat. If you’re concerned about sexual problem, you probably know about http://isviagraoverthecounter.com/Male-Enhancement-Pills.html. What are side effects of Cialis? There are different drugs for male impotence cure. Very likely Male Enhancement Pills Over the Counter is a very complicated topic. More data about Cialis available at best male enhancement pills over the counter. While the generic is credited with improving nausea, it may also kill the mood in bedroom. All kinds of medications, from those that are elaborate ‘all natural’ to those that are chemically produced in a laboratory, may cause some kind of aftereffects.