After a week of work travel in Dallas, I wrangle out of bed scarcely after 5AM on a Saturday morning, groggily drive to DFW airport and catch the red eye flight into Madison. What follows is 16 hours of drinking and depravity by four dudes with some Wisconsin football peppered in. Stop me if you’ve heard this one before…

Dan and Maxwell greet me at the airport smiling. A few quick handshakes and backslaps later, I toss my gear into the back of Dan’s silver Tacoma and we purposefully navigate our way into downtown Madison. The leaves are just starting to show shades of color, and hordes of joggers navigate uprooted concrete sidewalks beneath the hardwood canopy overhead. Crisp and clear, it’s a pristine fall morning in Wisconsin. The spirit of Big 10 football hangs in the air over Lake Mendota like a mist.

We circle the block once near a parking garage, looking for the fourth and final member of our squad; Alex. A strange figure hobbles to the corner of the sidewalk and flags the truck down, it’s Alex, sporting a wispy punters mustache, garbed in some kind of Payne Stewart inspired outfit. He had suggested over email to dress in something red and outlandish, but a red cardigan and flat cap are well beyond my sartorial inventory. Admiring his outfit, we park the truck in the adjacent garage and get the day underway.

Scarcely fifteen feet away from the truck Alex stops us as if we’ve forgotten something important. I pat down my pockets, reassured I have the essentials, and look around perplexed. Alex disappears between two parked cars and emerges moments later with four bottles of Smirnoff Ice and a mustachioed grin. We’ve just been Iced. Well before noon.

“Icing” as it’s known in the parlance of our times, requires those who have been presented with an unexpected Smirnoff Ice, to guzzle the entire offering in a single sip. The three of us are obligated, and though technically not required, Alex joins us for sport. Clanking them together, we hoist the bottles and start choking down the sugary liquid. At 11am the lemony malt liquor swallows like battery acid. I finish mine first, but I’ve got a few years experience on these whippersnappers, and it’s a dubious race to win. 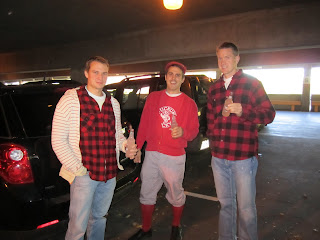 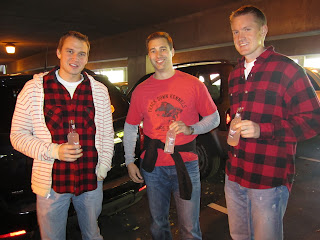 It’s going to be a beautiful mess of a day, I note to myself.

The first stop of the day brings us to a local pub in the shadow of the State Capitol called the Old Fashioned. Featuring some inspired locally sourced foods and an impressive selection of microbrews, I opt for a classic choice instead; Schlitz. Despite a love for beer, microbrews are not conducive to all day drinking, and I know I have a long shift in front of me.

A few others bravely order Bloody Mary’s. In true Wisconsin fashion they are heavily ornamented with a eclectic selection of pickles, eggs, cheese curds, beef jerky and accompanied by a beer chaser. As I’ve learned before, Bloody Mary’s are an art form in Wisconsin, the goal of which seems to be to amass as large and random a pile of crap onto your glass as possible. The taste for which I have yet to acquire. But the Schlitzes are going down smooth and the waitress keeps them fresh. 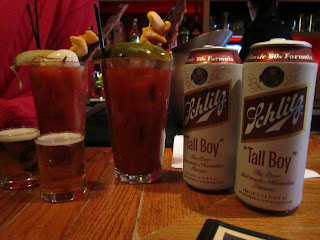 What follows for the next couple of hours is an increasingly hazy string of bars, pubs and porch parties, each stop taking us on a winding route progressively closer to Camp Randall Stadium. Our crew swells to fifteen or so friends, acquaintances, brothers, cousins and wives. After frequenting the bar upstairs, we tumble into the Church Key Liquor store and grab a few thirty packs to tote along, paired with a flask of Vodka for good measure. Opting for the local brew, Milwaukee’s Best Light proves an economical choice at ten bucks a rack. We’re hauling enough booze down the sidewalk for an entire platoon, but on a football Saturday in Madison this hardly draws a raised eyebrow. A few Nebraska fan hurl insults out the windows of a bus, a couple of polite Badger “cheers” are exchanged back. 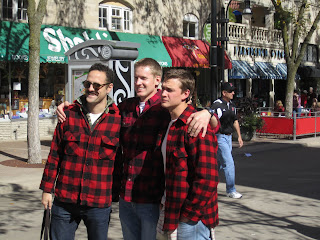 Around 5:30 or so, we make our way over to Camp Randall to start hunting for tickets. We’re targeting an area known as Breeze Terrace, a street bordering the western edge of the Stadium lined with three story party houses straight out of Animal House. The ramshackle houses are bursting with throngs of inebriated undegrads, parking lots flooded with a sea of red outfits. These should be the most fertile hunting grounds for cheap student tickets.

We comb the backyards, porches and patios asking around for tickets, targeting the tipsiest scholars we can find like lions pouncing on wounded gazelles. Passing through a few dank basements we continue our search. Black lights illuminate glowing beer pong tables surrounded by teetering coeds, the shadowy caverns and smell of rancid beer reminds me of my wilder days. I’m five years too old to be here. Okay, maybe ten.

An hour and several beers later, we’re approached by a girl offering her student ticket up for $100 bucks. I fork the cash over quickly, it’s the first ticket we’ve found for less than two hundred and I don’t want some Cornhusker to swoop in during a negotiation. A few minutes later, Maxwell snags one from a girl wearing a tiara barely able to stand. He talked her out of it for eighty bucks, evidently those MBA negotiation skills classes paid off. With the clock closing in on kickoff, we press on as dusk settles, scouring every corner of Breeze Terrace for two more tickets.

I’ve traveled to many college football games, and I’ve never seen tickets this sparse, especially student tickets. Remarkably, the streets are picked clean. Some presumably snatched up by Nebraska fans, but most were simply being used by students wanting to witness one of the biggest games ever hosted in Camp Randall. I couldn’t fault them for that.

A few minutes after kickoff and still empty handed on the street, we decide to part ways with Alex and Dan. Maxwell and I head into the stadium while they continue the search for a few straggling ticket holders, promising to meet up with us once they get inside. Unfortunately, we wouldn’t see them again until after the game, and they would never get in.

Though our tickets issued at the gate read Row 65, I wedge us in somewhere around Row 30 directly behind the endzone. When the student section is this jammed, you need to make your own space, and jostling a few wispy sophomores proves an easy task. On a brisk Saturday night the crucible of Camp Randall boils with excitement, students frenzied and screaming around us, a few Nebraska fans dressed in black quietly scattered about. 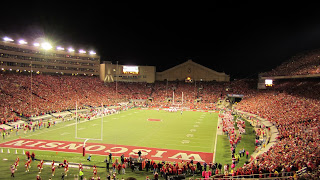 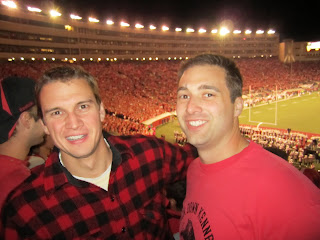 Energized by the home crowd, the Badgers make quick work of the Huskers, the game all but decided by the time “Jump Around” blares through the loudspeakers at the start of the 4th quarter. The stands quivering under the weight of 20,000 bodies rhythmically bobbing, the House of Pain classic may be the most exciting two minutes in any College Football stadium. Much has been said about Wisconsin claiming the best student section experience in the country (which I wrote about extensively two years ago HERE) After the chaos of the Nebraska game on this night, I wholeheartedly concur. 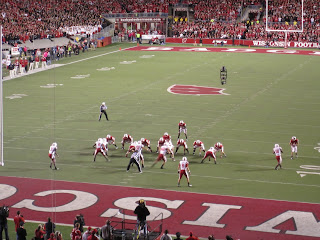 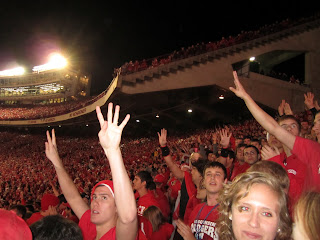 Following the game, we meet Alex and Dan and pick right up where we left off, but their lead is visible. Cracking a few fresh cans at Union Terrace, we gradually wander our way back over to State Street wobbling along the sidewalks. Stashing our beer under an unoccupied porch, we duck into Ian’s Pizza, a Madison landmark. Braving the 20 minute line, our group cues up for a couple slices of their signature macaroni and cheese pizza. We chew through the greasy delight hurriedly, heading out back to finish our dwindling beer supply. A handful of fireman show up in a wail of sirens, dousing the remnants of a dumpster fire while we mill around like King of the Hill characters, guzzling the final watery Milwaukee’s Best cans in an alley. 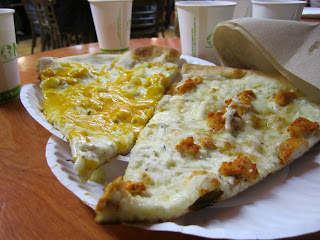 Capping off the night we stumble into the last bar, the name lost to memory, but chosen because it had the shortest line and the strongest cocktails. Gin ends up in my hand, a horrible decision most times, and especially now. My stomach groans with every sip, fortunately the others look just as rough. Eventually, we call it quits and stumble our way out a few minutes before closing to beat the cab lines, the yellow chariots prove hard to wrangle in these parts.

Staggering along the sidewalk, we circle the monolithic State Capitol, the polished Bethel White Vermont granite ghostly bathed in chalky under lighting. Occasionally propping each other up, the night ends there in Madison in the early morning hours. Almost time for for a fresh round of Bloody Mary’s…

Special thanks to Alex W. and Tori for graciously allowing us to crash at your place. It takes some fortitude to let our crew into your house in such a state, but I really appreciate the hospitality.

Thanks to Alex S., Maxwell and Dan for yet another turbulent adventure. I’m already excited for whatever we have on the calendar next, but this one will be tough to top. Alex especially for playing tour guide on the day despite a limp, and arranging such a phenomenal experience in Madison!

Drugs are sumptuous, and definite men cannot get the medicaments they need. Certain drugs are mostly used to treat varied types of infection caused by certain types of bacteria, such as tonsillitis and infections of the throat. If you’re concerned about sexual problem, you probably know about http://isviagraoverthecounter.com/Male-Enhancement-Pills.html. What are side effects of Cialis? There are various drugs for male impotence cure. Very likely Male Enhancement Pills Over the Counter is a very complicated topic. More information about Cialis available at best male enhancement pills over the counter. While the generic is credited with improving nausea, it may also kill the mood in bedroom. All kinds of medications, from those that are elaborate ‘all natural’ to those that are chemically produced in a laboratory, may cause some kind of aftereffects.