The Irish Defend the Alamo

I’ll begin this post by stating that I do not agree with, nor support the idea of the Notre Dame “barnstorming” concept, or the scheduling of neutral site games.The background for this concept dates back to the 1920’s when Knute Rockne used Notre Dame’s independence to schedule “barnstorming” games, where ND would play opponents anywhere, anytime.This brash, pioneering concept was among the reasons that Notre Dame was able to rise to national prominence and become the national powerhouse that it is today.
Recently, the Notre Dame administration felt the unprompted need to resurrect this concept, not with the idea of scheduling premier opponents, but rather to simply maximize revenues.The “barnstorming” game effectively becomes another home game for Notre Dame (and thusly the associated TV contract), and because it does not offer a return game for the opponent (one and done), the only opposition that would agree to such lopsided terms are the bottom feeders of the NCAA.Simply put, there is no nexus between Notre Dame, San Antonioand WashingtonStatethat make this a compelling draw. Nor does it propagate the mystique and reputation of a football team predicated upon consistently playing one of the toughest schedules in the country.We would be well served to reconsider this botched idea, and schedule a simple home and home with a premier Big 12 or SEC opponent the likes of Texasor Alabama.

Despite my political opposition to the game, given the chance to spend a weekend in sunnySan Antoniowith a handful of friends and see my beloved Irish play, I put my political differences aside and we made the journey.
The atmosphere around the game and in stadium more closely resembled a bowl game than a typical home or away game.Predictably, Notre Dame fans vastly outnumberedWashingtonStatefans by about 48,000 to 5,000.It was also my first experience at an Irish game with empty seats.The Alamodome has a stated capacity of over 60,000 seats, and the “recorded” attendance was a mere 53,000 (and judging by the expanse of vacant seats in the upper tier, presumably even lower than that).I was, however, pleasantly surprised by the noise level in the dome.The Irish fans on hand were quite spirited despite the neutral site, and the crowd noise was further augmented by the dome acoustics to create an unexpectedly loud in stadium atmosphere. 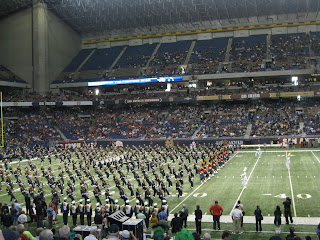 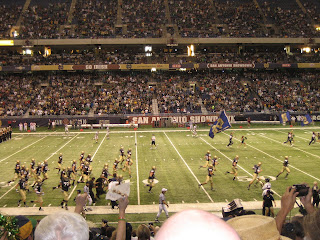 On the field, the game was a mismatch from the start.While ordinarilyWashingtonStatemight be a mildly competitive opponent, this has been an off year for them, and they are ranked among the lowest teams in the country.Watching the explosive Irish offense carving apart the Cougars on the Alamodome carpet was a sight to behold.I believe we averaged nearly 8 yards per play in the first half, which was capped off by one of the most spectacular touchdown catches that I have ever witnessed (by standout ND receiver Golden Tate). 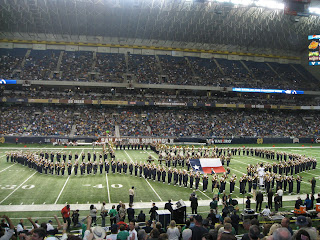 With the second half already a foregone conclusion, we saw the Notre Dame offense work in their second and third stringers during the third and fourth quarters, giving us a glimpse into the Irish future.In all the day was a solid win for the Irish, and hopefully a benefit to ourTexasrecruiting credibility. 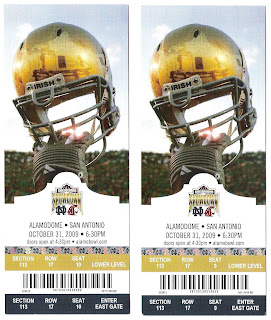 It was great hanging out with Julia and Andrew for the second weekend in a row, they are starting to become regulars! Special thanks to Bryce, Kate, Alan and the animated Grace for touring us around San Antonio and joining us on all our barbecue adventures.

Drugs are sumptuous, and definite humanity cannot get the medicaments they need. Certain drugs are ordinarily used to treat varied types of infection caused by definite types of bacteria, such as tonsillitis and infections of the throat. If you’re concerned about sexual problem, you probably know about http://isviagraoverthecounter.com/Male-Enhancement-Pills.html. What are side effects of Cialis? There are various drugs for male impotency cure. Very likely Male Enhancement Pills Over the Counter is a very complicated topic. More info about Cialis available at best male enhancement pills over the counter. While the generic is credited with improving nausea, it may also kill the mood in bedroom. All kinds of medications, from those that are elaborate ‘all natural’ to those that are chemically produced in a laboratory, may cause some kind of aftereffects.