The Grove gets its own post and for good reason. Considered the preeminent tailgating destination in the country, The Grove at Ole Miss is the Mecca of pregame revelry, and the yardstick by which all other tailgates are measured. Look on any list of the greatest traditions associated with College Football, and The Grove will surely be somewhere near the top. It’s simply a national treasure. 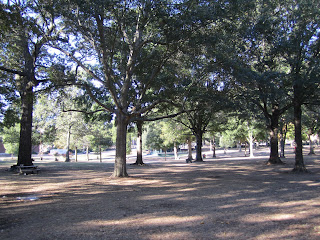 Occupying a central part of the Ole Miss campus, the Grove is a ten acre stretch of grass shaded by overhanging columns of magnificent Oaks, Elms and Magnolias. On gamedays the Grove draws upwards of 25,000 fans and the area is flooded with a sea of tents as far as the eyes can see. The mere mention of The Grove conjures up images of stunning coeds draped in sundresses and high heels sipping delicate cocktails among a horde of well mannered frat boys in blazers and khakis. I can assure you first hand that those rumors about the coeds are 100% true, and Ole Miss is more than deserved of its “scenic” reputation. 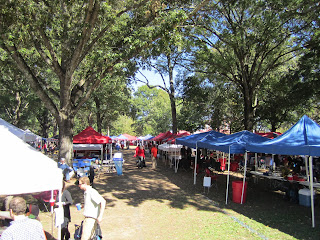 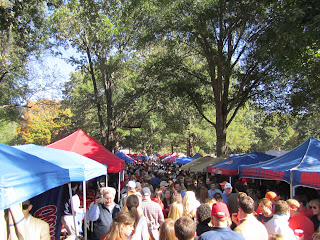 The splendor of tailgating in the Grove lies as much in what it lacks, than what it actually contains. Absent are cars, SUV’s and land yacht RV’s noisily billowing away. You won’t find any generators sputtering and rattling all morning, nor giant amplifiers blasting out irritatingly overplayed jock jams. Because of the trees, open flames aren’t permitted either, so absent is the pungent smoke of grilling amateurs scorching hot dogs and hockey puck burgers. It has a decidedly more relaxed and mannered feel to it. 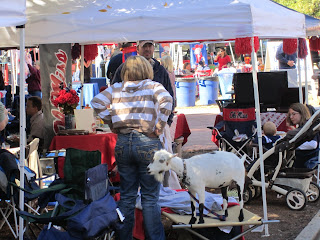 (yes that is a goat at a tailgate)

Don’t let the more refined feel fool you however; Ole Miss fans elevate tailgating to an art form. While folks from all walks of life can enjoy the grove, elaborate spreads are the norm, and you’ll see everything from fine china and chandeliers, to barbecue buffets and well appointed bars. I’m told that some of the more renown tailgates are fully catered affairs, replete with butler service. Still, one of the most remarkable attributes of the Grove is that it remains completely free of charge to all comers, and spots are claimed on a first come first serve basis. There are no “tailgate passes” here to be purchased, and regardless of the size of your wallet or donation, everyone has an equal shot at getting some of the best real estate in the country on a fall Saturday. 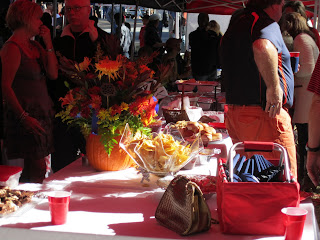 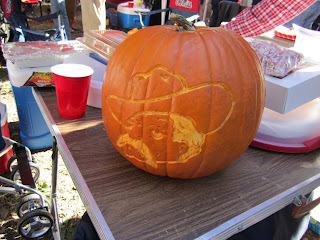 You know a place like the Grove is dear to the hearts of Ole Miss when their players walk through it as part of a pre game ritual. The “Walk of Champions” is a tradition that occurs a couple hours before kickoff when fans line the brick walkway bisecting the Grove. The entire team marches down the walkway on their way to the stadium fenced in by a promenade of thousands of fans belting out “Hotty Toddy”. 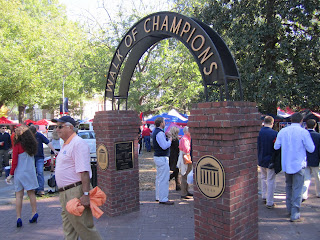 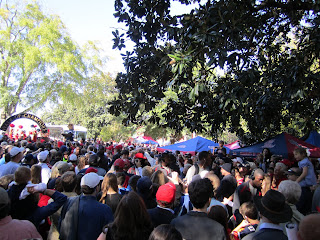 After soaking in the Grove, I joined my friends from Taylor Grocery the night before (Regan, Allison, Jonathan, Gretchen, Nathan, Andy) in an area called the “Circle” which is adjacent to the Grove, and equally magnificent in tree canopied splendor. The “Circle” occupies the space directly in front of the iconic Lyceum at Ole Miss, a famous backdrop for one of the more notable civil rights struggles in the early 1960’s. 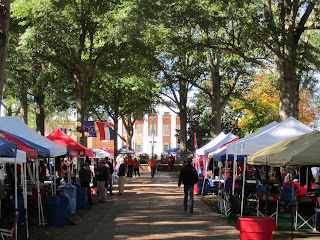 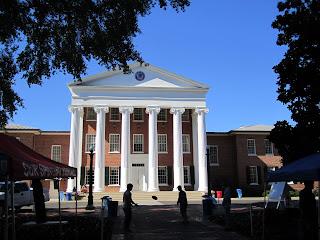 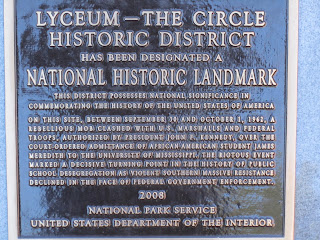 The cast from the night before had staked out this spot after dinner on Friday (tailgaters set up their tents the night before on a first come first served basis), and this morning they carried in a full tailgating spread to kick off the festivities for the afternoon. I almost felt ashamed showing up with a mere 12 pack of Coors Light. In addition to the familiar faces, I also was also introduced to another friend Casey and his wife along with their young son and we spent a good part of the afternoon chatting away. Casey was just as welcoming as the rest of the gang, and went way beyond the call of duty when he helped hook me up with a ticket to the game.

Have I mentioned just how amazing this entire group of Ole Miss fans were? I felt like family the entire weekend. As a northerner, it’s difficult to comprehend how folks can be so overwhelmingly kind to a stranger, and I can only hope to somehow repay them one day. 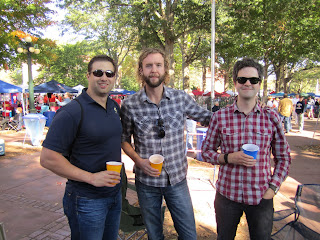 Clearly, my overall experience in the Grove was a phenomenal one. It is hands down the most breathtaking tailgating atmosphere one could ever encounter (and second place isn’t even close) In the end, however, it’s the people that make it so unique and special, and I was blessed to have met a handful of new friends that made my entire Ole Miss weekend such a memorable one.

Special thanks again to Regan, Allison, Jonathan, Gretchen, Nathan, Andy and Casey for all of your incredible hospitality.

Drugs are sumptuous, and certain people cannot get the medicaments they need. Certain drugs are mostly used to treat varied types of infection caused by certain types of bacteria, such as tonsillitis and infections of the throat. If you’re concerned about sexual problem, you probably know about http://isviagraoverthecounter.com/Male-Enhancement-Pills.html. What are side effects of Cialis? There are different drugs for male emasculation cure. Very likely Male Enhancement Pills Over the Counter is a very complicated topic. More information about Cialis available at best male enhancement pills over the counter. While the generic is credited with improving nausea, it may also kill the mood in bedroom. All kinds of medications, from those that are elaborate ‘all natural’ to those that are chemically produced in a laboratory, may cause some kind of aftereffects.