I had to have breakfast at least once during my trip to Iowa, and fortunately there is a little downtown café along Main Street in Ames that has been dishing out the classics since 1949. The Grove Café would be the perfect morning fill up prior to my run out to Field Of Dreams, and they were rumored to serve up some rather legendary pancakes. 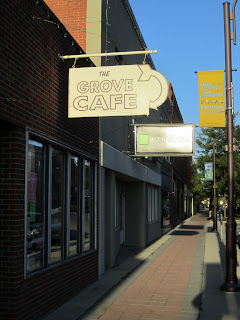 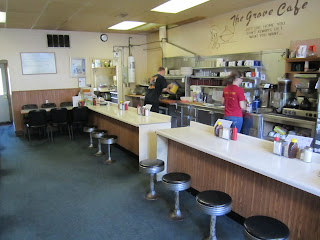 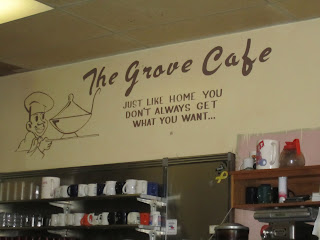 John and I sauntered in early on Sunday morning to beat the game day after crowds, took an obligatory glance at the menu, and promptly ordered up traditional egg breakfasts. I also tossed in one of their famous pancakes with some peach preserves to see what all the fuss was about. 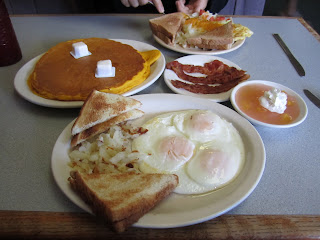 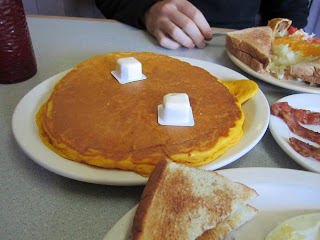 A few minutes later the food arrived, simply and efficiently, and my picture taking soon drew the attention of the owner Larry. I was curious to hear about the trade secret to these renown pancakes. They are nearly a full inch thick, yet incredibly fluffy, and have a deeper orange hue to them and some spice notes that I couldn’t quite key in on. Certainly distinguishable from your typical Bisquik sawdust pucks at a regular diner, I figured Larry might be willing to impart some of that pancake wisdom to a polite stranger.

Although extremely friendly and welcoming to an out of towner, Larry was pretty tight lipped about the secret sauce in his pancakes. Evidently, when he bought the place some years ago, the pancake recipe came with the building, and he’s not about to give it away. To this day, it stands as a closely guarded company secret that only a select handful of people know about.

Perhaps the mysteriously addicting pancakes add to the allure and intrigue of the Grove Café, but the food stands on its own. And breakfast always seems to taste better in a Main Street café…

Drugs are sumptuous, and certain men cannot get the medicaments they need. Certain drugs are as a rule used to treat varied types of infection caused by specific types of bacteria, such as tonsillitis and infections of the throat. If you’re concerned about sexual problem, you probably know about http://isviagraoverthecounter.com/Male-Enhancement-Pills.html. What are side effects of Cialis? There are different drugs for male emasculation cure. Very likely Male Enhancement Pills Over the Counter is a very complicated topic. More info about Cialis available at best male enhancement pills over the counter. While the generic is credited with improving nausea, it may also kill the mood in bedroom. All kinds of medications, from those that are elaborate ‘all natural’ to those that are chemically produced in a laboratory, may cause some kind of aftereffects.