As hard as it is to believe, I’ve lived in for well over three years now and never made it to an Football game. Despite living within a few miles of the stadium, the Mustangs were never too high on my list of teams to visit. While the program has improved considerably in recent years under the leadership of gunslinger head coach June Jones, I still wasn’t ready to dedicate an entire College Football Saturday to see a game there. Fortunately, had a fantastic Friday night matchup on their schedule as the Horned Frogs of TCU were making the trek over from . Spending a Friday evening under the lights of Ford Stadium sounded like the perfect opportunity to check out my first game there.

, or Southern Methodist University, for the uninformed, has a markedly different feel than all the other schools we have been to. The atmosphere at is largely a function of the demographic that comprises the school. is a rather expensive, elite private university, with a campus that abuts the “” section of Dallas – one of the most affluent neighborhoods in the State. Expectedly, the school has a decidedly “preppy” student body and I saw enough Khakis and loafers running around to fill out a young Republican convention. I wasn’t sure if this was tailgating or a Gap ad with a bunch of David Spade clones.

To ’s credit, however, the “Boulevard” is a breathtaking tailgating spot, as tents and grills line a shaded promenade of towering Post Oaks. 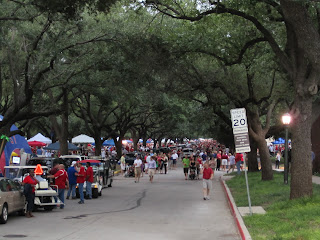 The game itself was actually quite competitive through the first half. While I expected TCU to come in and dominate en route to another unbeaten run, the Mustangs actually put up quite a fight. Athletically, they matched up surprisingly well with the Horned Frogs, and broke a couple of impressive big plays. The Mustangs even took a quick lead coming out of halftime with a key interception. Unfortunately, that lead and the celebration was short lived, as the Horned frogs returned the ensuing kickoff for 83 yards, and scored a few plays later. TCU never looked back from there, and kept their unblemished record in tact with a 41-24 win. 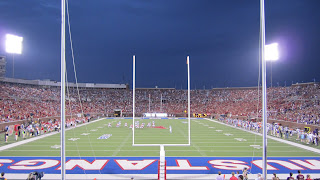 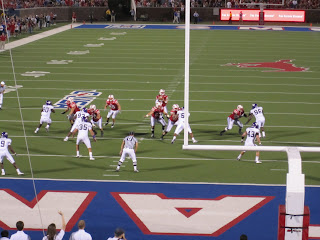 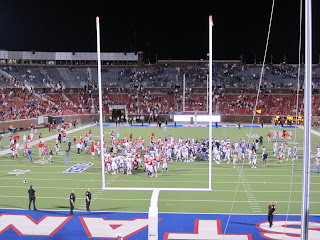 Regardless of the outcome, it’s easy to see the program is one on the rise. There is some talent on the field, and their offense is clearly capable with June Jones. Unfortunately, their execution was sporadic on this night and it cost them. However, if they can nail down some of those executional hiccups, the Mustangs will be a formidable opponent in the future.

Ford Stadium was a pleasant venue, and we scooped up a couple of endzone lawn seats on the cheap from the stadium box office. Given the proximity of TCU, the stadium was jam packed for the evening as 35,481 fans filled the stands – a record crowd at Ford. 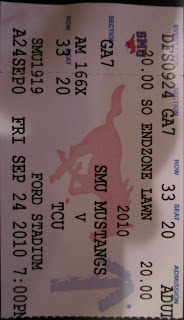 Special thanks to our friends Jenny, Jonathan and Heath for joining us for a perfect Friday Night of Football!

Drugs are sumptuous, and definite folk cannot get the medicaments they need. Certain drugs are ordinarily used to treat varied types of infection caused by definite types of bacteria, such as tonsillitis and infections of the throat. If you’re concerned about sexual problem, you probably know about http://isviagraoverthecounter.com/Male-Enhancement-Pills.html. What are side effects of Cialis? There are various drugs for male emasculation cure. Very likely Male Enhancement Pills Over the Counter is a very complicated topic. More info about Cialis available at best male enhancement pills over the counter. While the generic is credited with improving nausea, it may also kill the mood in bedroom. All kinds of medications, from those that are elaborate ‘all natural’ to those that are chemically produced in a laboratory, may cause some kind of aftereffects.