If you follow the blog closely you may recall from last year that I was rather crestfallen that we would be unable to sample the notorious meat pies at Lasyone’s restaurant in Natchitoches. Since I had spent the better part of the last year practicing how you actually pronounce Natchitoches (it’s Nack-ih-tish by the way), I assured myself that this year the meat pies would not elude me again The place is an anchor in Natchitoches however they keep some rather elusive hours so our trip out to Baton Rouge required military precision to hit this unique Louisiana landmark. 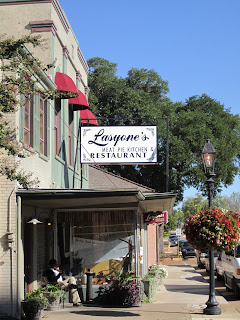 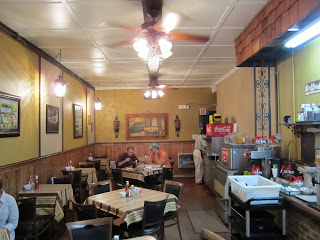 We arrived for a mid morning breakfast and settled into a table without any crowds. I took an obligatory glance over the menu, despite the fact that I had already fawned over it online for the last two weeks. When the waitress ambled over I promptly ordered up a meat pie breakfast with a side of – you guessed it- more meat pie. In fact some of us (Kate) were even wise enough to skip the breakfast part entirely and order meat pies exclusively. Consistent with all great places simplicity prevails at Lasyone’s as there is only one choice of meat pie on the menu which the waitress informed us was a combination of spiced beef and pork.

The pies are most aptly described as a fried empanada. However, unlike empanadas which can tend to get a bit dry, the Lasyone’s meat pie is moist throughout and needs no condiment to ease it down. They have a wonderful crispy crust that flakes away to a moist spiced ground meat center with just the right ratio of crust to filling to make them satisfying but not heavy. There is nothing complex or extravagant about the meatpies at Lasyone’s, they’re just good, simple food. 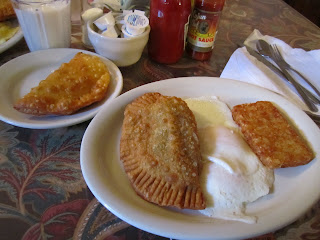 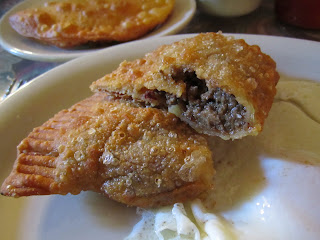 Drugs are sumptuous, and definite humanity cannot get the medicaments they need. Certain drugs are ordinarily used to treat varied types of contagion caused by certain types of bacteria, such as tonsillitis and infections of the throat. If you’re concerned about sexual problem, you probably know about http://isviagraoverthecounter.com/Male-Enhancement-Pills.html. What are side effects of Cialis? There are various drugs for male emasculation cure. Very likely Male Enhancement Pills Over the Counter is a very complicated topic. More data about Cialis available at best male enhancement pills over the counter. While the generic is credited with improving nausea, it may also kill the mood in bedroom. All kinds of medications, from those that are elaborate ‘all natural’ to those that are chemically produced in a laboratory, may cause some kind of aftereffects.