Driving east on Interstate 64 out of Louisville on an early Saturday morning, the change in geography starts becoming more pronounced. The stretching plains of the Midwest gradually start undulating into the far western foothills of the Appalachians. The highway bridges a few ravines now, and bisects great rock cuts carved into the Kentucky Limestone. I’m entering Bluegrass Country, the picturesque rolling hills bordered by long sections of split plank horse fence. Thoroughbreds graze on the wet morning grass, while I graze on a few sunflower seeds and motor on into Lexington.

I bypass the twenty dollar ripoff parking in front of a few houses, circling a few side streets until I shoehorn into an open spot along an empty curb. Rap music pumps out of an open window in the house out front, and beer cans litter the garden. A few more houses down, some students are milling around the yard clutching beers, tossing a Frisbee at a PVC pipe planted in the ground. Chalk up another new drinking game I am unfamiliar with.

It’s my first SEC game of the season, if you could call it that. Kentucky fans would be quick to tell you that real athletics on campus don’t start until basketball season, football is just a warmup. Though still certainly an SEC school, there is a different feel on campus than some of the other traditional SEC powerhouses that I have visited. It’s a decidedly more relaxed atmosphere. Still plenty of tailgating and revelry, but without the unbridled passion of a place like LSU for instance. 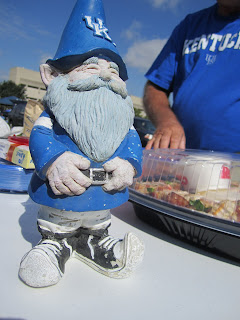 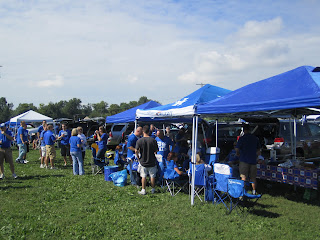 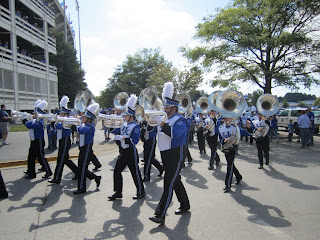 I mill around the stadium for a few minutes, dickering with the scalpers, chuckling at some of the prices they demand for a Kentucky versus Central Michigan ticket. I find a scraggly kid in a hoodie instead, pawning his uncles’ tickets. Twenty bucks later and I hustle into Commonwealth Stadium to catch the opening ceremonies. 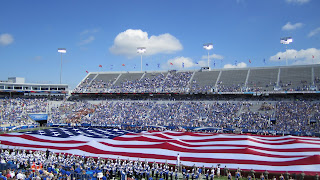 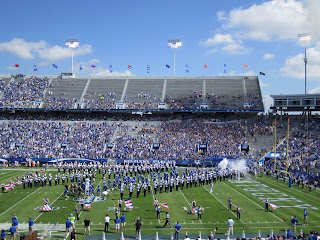 It’s a beautiful Saturday afternoon for football, eighty degrees or so and sunny. I’ve got some extra room on the aluminum bleachers next to me, so I spread out a bit and relax. Central Michigan jumps out to a surprising early lead, stifling Kentucky in the first half and taking a 13-6 lead at halftime. But the Wildcats don’t fold. Finding their rhythm on offense, they score three touchdowns in the second half, one of them an electric 87 yard run by Josh Clemons and cruise to a 27-13 comeback win. 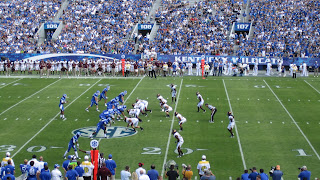 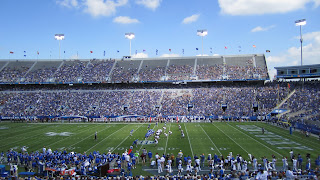 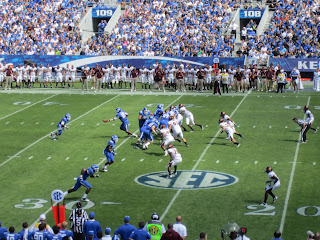 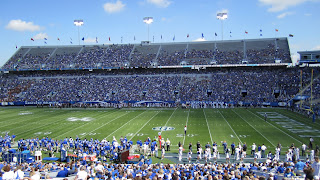 Sunburnt from the unobstructed afternoon sun, I wander out of the stadium after the final whistle and pick my way down side streets to my car. A couple of those same students are passed out on the porch now, hoodies pulled tight over their slouched heads. All is right in Lexington on a College Football Saturday…

Drugs are sumptuous, and specific people cannot get the medicaments they need. Certain drugs are as a rule used to treat varied types of contagion caused by certain types of bacteria, such as tonsillitis and infections of the throat. If you’re concerned about sexual problem, you probably know about http://isviagraoverthecounter.com/Male-Enhancement-Pills.html. What are side effects of Cialis? There are different drugs for male impotence cure. Very likely Male Enhancement Pills Over the Counter is a very complicated topic. More data about Cialis available at best male enhancement pills over the counter. While the generic is credited with improving nausea, it may also kill the mood in bedroom. All kinds of medications, from those that are elaborate ‘all natural’ to those that are chemically produced in a laboratory, may cause some kind of aftereffects.