After hurrying out of Lawrence, I made the quick 90 mile drive out to Manhattan, Kansas for the second game of my Saturday Sunflower State doubleheader; a 7PM night tilt between the Kansas State Wildcats and Texas Longhorns. Unexpectedly, however, the final ten miles of the ride proved to be one of the most breathtaking I’ve had on my travels.

Traveling North along K-177 on the way into Manhattan, the road passes along the Konza Prairie which is a protected tallgrass prairie owned by Kansas State University. The Konza refuge is part of the larger Flint Hills prairie, which at nearly 1.6 million hectares is the largest stretch of original, undisturbed tallgrass prairie remaining in the U.S. The geology of this particular area defied the plow blades of early settlers, and the understated beauty of the vast plains lies pristinely unchanged from when the Comanche ruled over it some 200 years ago. Despite a pressing game time, the expansive power of the gold flecked landscape at dusk was too much to resist and I pulled into a scenic overlook for a quick photo respite. As far as vistas go on the Pigskin Pursuit, this was at the top, and rivals anything I have seen in the handfuls of National Parks I have visited. 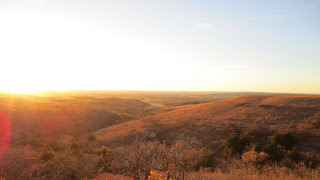 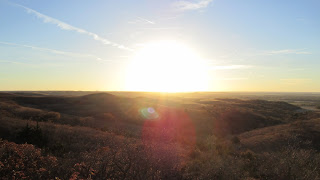 After scooping up a quick ticket outside for a paltry twenty bucks, I hustled into Bill Snyder Family Stadium with a full fifteen minutes before kickoff, and was greeted by the cacophony of 40,000 other fans that had already beaten me in. Evidently, folks are rather passionate about their Wildcats in Manhattan, as the stadium was packed nearly to the brim well before kickoff with legions of purple clad faithful cheering loudly. Once the game kicked off, the stadium got even louder and despite a stated capacity of only 50,000, I can tell you from experience that Bill Snyder plays much louder than its capacity would belie. It was an impressive atmosphere. 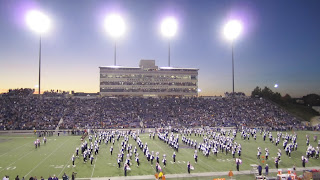 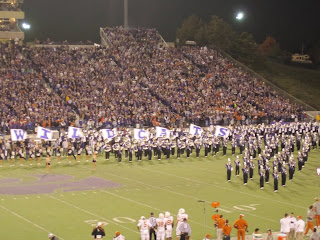 The game proved to be a rather interesting one. K-State has a reputation for playing Texas rather tough every year, and this proved to be no exception. In fact, the Wildcats absolutely pasted the Longhorns, dropping 39 points on them in an unrelenting option rushing attack. The Wildcat defense forced 5 interceptions out of Texas quarterback Garrett Gilbert, and held the Longhorns to a shutout until late in the 4th quarter when they finally snuck in a pair of touchdowns in garbage time. It’s been quite some time since Texas was absolutely manhandled in this fashion, and Kansas State capitalized on every opportunity. The most remarkable statistic of the night was the fact that at one point in the 4th quarter, Kansas State led 39-0 and had exactly ZERO yards passing. 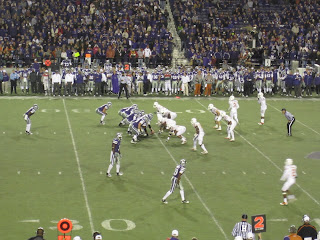 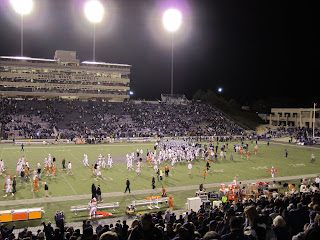 I spent the better part of the game seated behind a gentleman named Steve, along with his daughter Cristin, her friend Emily and father Jim. A former K-State grad himself, Steve was in the stands with his daughter for father–daughter day, and I evidently caught their attention when I wandered in garbed in a Notre Dame sweatshirt. Steve was fascinated by my story, and we spent most of the game chatting away about some of my travels. He tuned me in to some of the finer points of K-State football, and we bonded over the rout unfolding on the field. Consistent with some of the other amazing folks I have met on my travels, Steve was incredibly kind and generous, inviting me out to his tailgate at halftime for a couple of cold beers. I met a handful of new friends and family members there, all of whom were equally friendly and eager to share what makes Wildcat football in Manhattan such a special place. 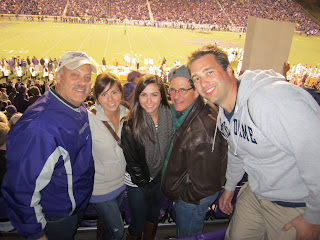 In the end, Kansas State was probably the biggest sleeper I’ve had on my College Football travels thus far. It’s not a school that gets much fanfare in the CFB landscape, but it’s a fantastic environment that should not be overlooked. The breathtaking expanse of the plains coupled with a surprisingly ardent, loud, and friendly fanbase make it a highly underrated gameday experience. Should I find myself in Kansas City again in the fall time, I would gladly keep driving past Lawrence on my way into Manhattan for a sunset showdown on the prairie.

Special thanks to Steve and his friends and family for their warm hospitality and cold beer. Next time I’ll be sure to find something purple to wear!

Drugs are sumptuous, and specific people cannot get the medicaments they need. Certain drugs are ordinarily used to treat varied types of infection caused by specific types of bacteria, such as tonsillitis and infections of the throat. If you’re concerned about sexual problem, you probably know about http://isviagraoverthecounter.com/Male-Enhancement-Pills.html. What are side effects of Cialis? There are different drugs for male impotence cure. Very likely Male Enhancement Pills Over the Counter is a very complicated topic. More information about Cialis available at best male enhancement pills over the counter. While the generic is credited with improving nausea, it may also kill the mood in bedroom. All kinds of medications, from those that are considered ‘all natural’ to those that are chemically produced in a laboratory, may cause some kind of aftereffects.