As you can guess, there’s no shortage of intestinal challenges in the city of Chicago, and if you share the same zest for gluttony and greasy gastronomy that I do, than you relish any visit to the city of corpulence. Sunday before the flight home was our chance to indulge.

After a quick inquiry to my resident townie friend and aspiring mustachio Bill, he laid out a handful of enticing options to challenge the heftiest of appetites. Unfortunately, two of those delightful temptations were closed on Sunday.Were I still living in Utah, I might expect these kind of primitive hours but in Chicago this goes over about as well as a Bears passing game.

The two closed options were:

Mr. Beef: Which requires little explanation other than the fact that it’s called Mr. Beef, and they specialize in Italian beef sandwiches.I salute their no nonsense approach.

Hot Dougs:Which had me at “Encased Meat Emporium”.Suffice to say, Hot Doug’s specializes in serving various types of hot dogs, sausage, and brats.They also give these treats some rather entertaining names, and can even be served up with a special side of “Duck Fat Fries” (French fries deep fried in duck fat).It may be worthy of a return visit for those fries alone.

I think my personal favorite from the menu was the:

(formerly The Virgil “the Turk” Sollozzo and the Luca Brasi)

Be sure to listen to the Hot Doug’s rock song as well, and consider adding it to your workout shuffle.

http://www.hotdougs.com/songs/rockmix.mp3
Ultimately, we settled on a third and equally tempting option, Fat Willy’s Rib Shack.And while I had some initial reservations about getting BBQ outside of Texas, my anxiety was soon relieved when I noticed a rather hefty woodpile stacked up out front. 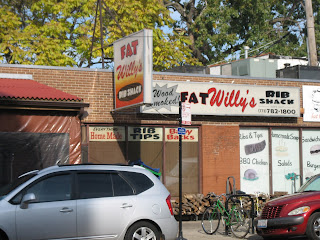 On Bill’s recommendation, all three of us promptly ordered up the pulled pork sandwich, and I snickered amusingly after the waiter asked me if I wanted the full or half sandwich.The brawny sandwiches arrived a few minutes later much to the delight of our awaiting appetites.In addition to being a moist pulled pork sandwich, it was topped with a unique vinegar garlic coleslaw, while the huge pile of meat invited a sampling of Fat Willy’s homemade sauces.

The sandwich was so good, in fact, that I nary had a chance to take a picture of it before I had nearly torn through the entire thing.What you see are the sad remnants of soon to be finished Fat Willy’s pulled pork sandwich of satisfaction. 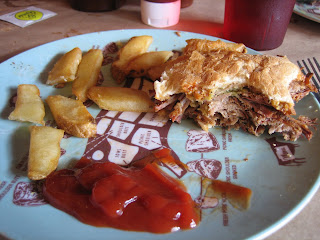 Special thanks to Bill and Rachel for hosting us for the afternoon, and Henry Jr. for the enthusiastic entertainment.

Drugs are sumptuous, and definite folk cannot get the medicaments they need. Certain drugs are ordinarily used to treat varied types of infection caused by certain types of bacteria, such as tonsillitis and infections of the throat. If you’re concerned about sexual problem, you probably know about http://isviagraoverthecounter.com/Male-Enhancement-Pills.html. What are side effects of Cialis? There are different drugs for male emasculation cure. Very likely Male Enhancement Pills Over the Counter is a very complicated topic. More data about Cialis available at best male enhancement pills over the counter. While the generic is credited with improving nausea, it may also kill the mood in bedroom. All kinds of medications, from those that are considered ‘all natural’ to those that are chemically produced in a laboratory, may cause some kind of aftereffects.

Cloudy with a chance of Meatballs…