My stomach topped and finally appeased after a formidable meal from Spanky’s, we began our waddle down the sidewalk in search of game tickets, as kickoff was scheduled in another hour or so.

Among the unique Tech traditions that we stumbled across was the wrapping of the “Into the Sunset Statue” of Will Rogers and his trusty steed Soapsuds.The statue is wrapped in red crepe paper before every home game by the Saddle Tramps (a TT all male spirit organization).I’ll also give you one guess as to which certain Texas school the “Southeast” END of this “Northwest” bound horse is facing. 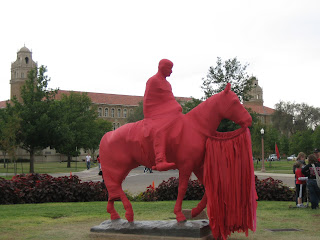 Scrounging for tickets at Texas Tech was almost too easy to be of any real sport.One of the scalpers gruffly proclaiming “things out here are tough today, there just aren’t a lot of extras for this game” was almost too comical to laugh.Unfortunately for him, the statement rang a bit hollow after I had already witnessed a half dozen or so people waving tickets around in a quick 5 minute walk.We even had a guy offer us a FREE single ticket, just so someone would use it.We quickly made our way to the Southwest corner of the stadium and were greeted by a sea of tickets thrust into the air for auction.

After perusing a handful of upper tier options, we quickly snatched up 2 two tickets in the 19th row of the lower bowl for 20 bucks a pop.Concerned that we had settled too soon, however, Mindy shortly found an older fellow pawning off some of his own boxed seats on the 50 yard line.We snapped those up as well, again for 20 bucks apiece ($39 face value each).Now with two sets of tickets in hand, I faced the dilemma being a seller in a market full of sellers.A quick walk down the concourse (and away from the throngs of people assuming the Statue of Liberty pose) with tickets above my head made quick work of the extras, however, as an eager young Texas Tech fan was thrilled to get them for the exact price I paid for them (20 bucks – We just wanted to sell them quickly and get into the game). 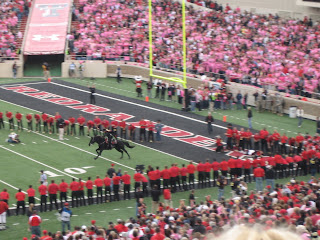 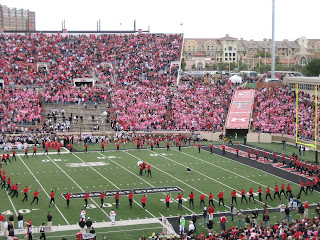 The game itself was a bit odd for a Tech game.Tech could usually be considered one of the most exciting and dynamic offenses in College Football.Typically, watching a Mike Leach offense is comparable to watching a red bull addled 13 year old rattling away on Madden 2009: jittery and lots of flailing.Saturday, however, was anything but, with a rather limp halftime score of 14-7 that left my eyelids getting a little heavy.The Red Raiders picked it up after halftime, however, on the strength of a QB substitution and marched to impressive 48-28 victory.

Overall, the stadium atmosphere was fair.Perhaps the function of a down year for Tech, an uninspiring opponent in New Mexico, and rainy drizzly weather, the 52,909 bodies at Jones AT&T Stadium never really came to life.The fans seemed flat, and unless their seat was on fire, standing was a reluctant rarity.Even the student section appeared uninspired and rather disjointed in sporadic bouts of cheering.On the whole, however, the fans were incredibly nice, polite and classy all the way around.It’s a gratifying pleasure to sit next to the family that you bought your tickets from (rather than a faceless scalper).Don and his wife Tammy were both gracious and knowledgeable hosts, and they treated us like their own for the entire game.

And of course, no post about Texas Tech would be complete without mentioning the infamous bell ringer.I caught a picture of him, but I’ll leave the linked video to do the remainder of explaining…. 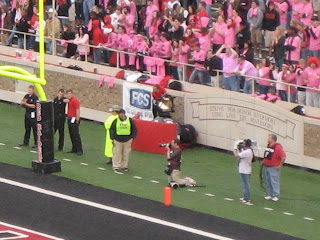 Drugs are sumptuous, and certain people cannot get the medicaments they need. Certain drugs are mostly used to treat varied types of infection caused by specific types of bacteria, such as tonsillitis and infections of the throat. If you’re concerned about sexual problem, you probably know about http://isviagraoverthecounter.com/Male-Enhancement-Pills.html. What are side effects of Cialis? There are varied drugs for male impotency cure. Very likely Male Enhancement Pills Over the Counter is a very complicated topic. More data about Cialis available at best male enhancement pills over the counter. While the generic is credited with improving nausea, it may also kill the mood in bedroom. All kinds of medications, from those that are considered ‘all natural’ to those that are chemically produced in a laboratory, may cause some kind of aftereffects.