Unlike the Poinsettia and Armed Forces Bowls that I attended recently, the Cotton Bowl Classic represents one of the most historic and prestigious Bowl Games in College Football. Tracing its roots back to 1937, the Cotton Bowl is the 5th oldest Bowl Game in the country, predated only by the Rose Bowl (1901), Sugar Bowl (1934), Orange Bowl (1934), and Sun Bowl (1934). Together, these five bowls represent the core of traditional Bowl games, although both the Sun and Cotton have recently found themselves excluded from the BCS. Traditionally, the Cotton Bowl Classic features a Big 12 team versus an SEC opponent, and this years contest would represent the 75th playing of the game. 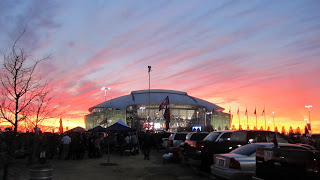 Interestingly, however, for the first time in its history the 2011 Cotton Bowl Classic would be a bit of a misnomer. During the last seventy five years, the game has been played in its namesake stadium the “Cotton Bowl” itself, an eighty year old facility occupying the Texas State Fairgrounds in Dallas. With the arrival of the new Jerry Jones inspired Cowboy Stadium monstrosity in Arlington, however, the game has been moved to this sparkling new location replete with sushi, Grey Goose and glow stick worthy décor. Perhaps AT&T ought to consider dropping the word “classic” from the game title. 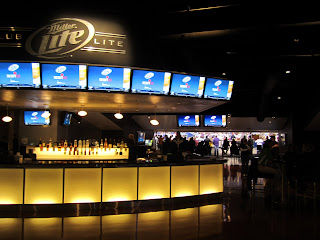 Despite being outside of the prestigious and lucrative BCS bowls, the Cotton Bowl was easily one of the more intriguing Bowl match ups of the season this year. As you have read on this blog before, both Texas A&M and LSU are two of the most revered game day atmospheres in the College Football landscape, and they each represent some of the most ardent fan bases in the game. While it certainly doesn’t equal the intrigue and prestige of the Connecticut versus Oklahoma Fiesta Bowl match up, I relished the opportunity to witness a clash between two of my favorite adopted College Football squads. 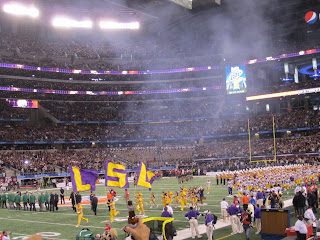 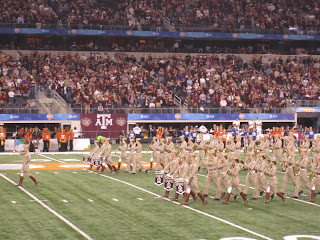 Joining me on the day were a handful of old friends Bryce and Jared, along with a newcomer, though big follower of the Pigskin Pursuit – Merritt. Luckily in town for work, Merritt had rushed out to the local Wal-Mart to procure herself an LSU t-shirt in a show of SEC solidarity (much to the chagrin of her bruised Alabama undergrad pride). The rest of us had opted for Aggie maroon, since we are in the Lone Star state after all.

Prior to the game, we met up with Kipper again for some tailgating festivities amongst the wafting aroma of his dual pit trailer. Enamored with his barbecue, I came to find out that Kipper in fact competes in regional barbecue competitions and has garnered a couple of first prizes on his chicken. On this day, however, I couldn’t take my eyes of the mouthwatering Turducken that he smoked, stuffed with a Cajun inspired crawfish and shrimp dressing. An enticing culinary nod to the two squads taking the field on the day, it was every bit as delicious as it looked. 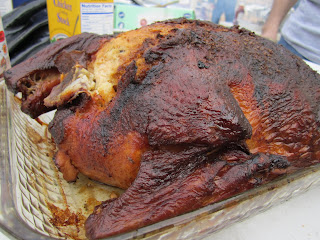 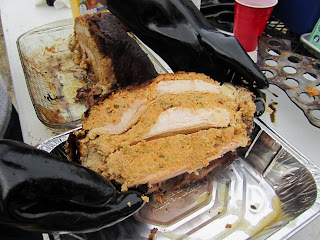 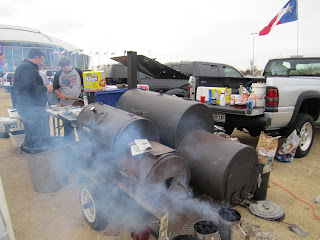 On the carpet, the Aggies came out firing first, jumping out to a 10-0 lead amidst a shocked Tiger defense. The potent Aggie offense was rolling, and audible high pitched whoops flooded Jerryworld. The celebration was to be short lived, however, as the LSU defense stiffened up and the gears started turning on their unpredictable offense. Erratic quarterback Jordan Jefferson took the lead, connecting on one of three touchdowns on the day with receiver Terrence Toliver. Jefferson, who had been benched a handful of times this season, really found his stride in this game, using his agility to elude capture on several occasions. The Aggie defense simply could not make a big third down stop, giving up a handful of agonizing third down conversions longer than ten yards. Celebrated A&M quarterback Ryan Tannehill, a converted wide receiver who had reeled off five straight wins for the Aggies, was uncharacteristically inaccurate, tossing three interceptions at critical times. In the end, LSU walked away with a convincing 41-24 win, and Bryce and I remained after the game amidst hordes of purple and gold clad admirers vociferously belting out “Neck” in celebration. 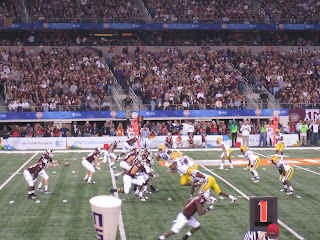 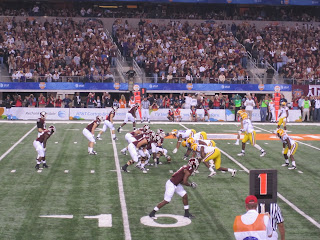 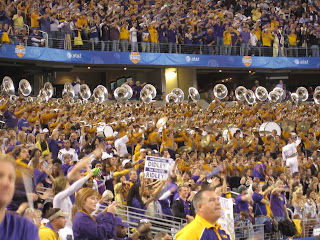 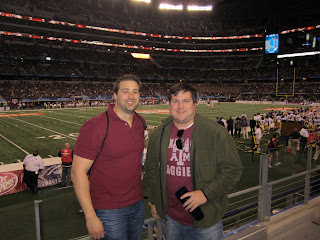 This was a fantastic matchup between two classic College Football teams worthy of the Cotton Bowl heritage. While LSU may have prevailed on this night, both teams are going to be interesting to watch next year. They both feature a bevy of underclass starters, and should find themselves atop the rankings next season. Though I need little convincing to go watch either Texas A&M or LSU play…

This marks the end of the Pigskin Pursuit for 2011! It’s been a pretty wild 19 game ride that has taken me from coast to coast this year. But be sure to stay tuned for some more updates, and a sneak peek at what’s in store for 2011! There are some big surprises on the horizon and you’ll want a preview…

Thanks to my friends Brian and Federico for helping me find tickets to this game, it’s a shame you guys couldn’t join, but we’ll certainly catch up for a few games next year.

Thanks for Merritt for diligently following and finally being able to join me on the Pigskin Pursuit! Hopefully we can find our way down to Tuscaloosa next year.

Special thanks to Bryce and Jared for meeting up with me for yet another stop on the Pigskin Pursuit. Always a pleasure to have you guys along, and the tradition will continue in 2011!

Drugs are sumptuous, and definite humanity cannot get the medicaments they need. Certain drugs are mostly used to treat varied types of contagion caused by definite types of bacteria, such as tonsillitis and infections of the throat. If you’re concerned about sexual problem, you probably know about http://isviagraoverthecounter.com/Male-Enhancement-Pills.html. What are side effects of Cialis? There are various drugs for male impotency cure. Very likely Male Enhancement Pills Over the Counter is a very complicated topic. More data about Cialis available at best male enhancement pills over the counter. While the generic is credited with improving nausea, it may also kill the mood in bedroom. All kinds of medications, from those that are considered ‘all natural’ to those that are chemically produced in a laboratory, may cause some kind of aftereffects.