On the list of sports destinations for fans in the Bay Area, San Jose State football, sadly, may not even crack the top ten. The city is a professional town first and foremost, dominated by the likes of the 49ers and San Francisco Giants. Even larger programs like Stanford, with their recent gridiron success, struggle to fill a 50,000 seat stadium and capture the appropriate mind share of fickle Bay Area fans. For smaller stature programs like the Spartans of San Jose State, being overlooked is simply part of the territory.

But not by me.

As I continue to probe further into the corners of the college football world, the Spartan program held a certain intrigue for exactly the reasons outlined above. Does a smaller program like San Jose State, completely overshadowed by the other options in town, still have the same kind of rabid fan base common to the college game? Can an under the radar city like San Jose, quietly the third most populous city in California, sustain a football program?

On Saturday afternoon I pressed south into San Jose to find out the answers to those questions. I’m on the third leg of a west coast tripleheader that would take me to three games in three days. Thursday night I had witnessed a Stanford thrashing of UCLA in Palo Alto, and Friday evening I watched a downtrodden Fresno State Bulldog team rescued by rain in the parched Central Valley. Today was the day for some Spartan football.

My journey begins perched on a barstool at Henry’s Hi-Life in the River Street Historic district of San Jose. Finding anything outside of a taupe colored strip mall in San Jose is a challenge, but the small remnants of the turn of the century, Italian immigrant, working class neighborhood remain in the River Street district. This run down, red clapboard building adorned with a glowing neon “Hi Life” sign started life as the Torino Hotel at the turn of the 20th century, and is purported to have been a brothel for some time. For the past fifty years Henry’s has called it home, and while the ramshackle structure would be right at home in a working class, rust belt city like Cleveland or Milwaukee, in a tech city like San Jose, it’s a standout. Dishing out beer and BBQ since 1960, the dark, oak and mirror paneled pub is a classic taproom. The kind of place where you grab a woven wood bar bowl of free peanuts and order up a boilermaker and Michelob. It even comes replete with a few barflies squabbling about the San Jose Sharks. Who knew there were actual sports fans in San Jose…

I pull up a stool along the slick, red leather bar rail and quickly settle into a pint of draft Shiner Bock. The only menu they have is painted up on the wall, to which the barkeep gestures with an outstretched index finger, a dingy bar towel draped over his shoulder. I opt for a two meat combination of their sole barbecue offerings: pork ribs and chicken. A steady stream of customers flow in behind me, each of them issued a plastic, numbered token by the hostess as part of Henry’s odd cueing system for dining room seating. Evidently, all dinner orders are placed at the bar, and then, only when the food is ready, are patrons finally escorted into the dining room for seating. A few newcomers audibly groan at the confusing process, pleading their case to the obstinate hostess who simply wags a finger at the sign in retort. I chuckle at the confused patrons like a grizzled regular. Hell, if it’s been working at Henry’s for 55 years – take a number and fall in line….rookie.

Surprisingly, the barbecue here is decent stuff. While “bar” BBQ usually draws a healthy dose of skepticism from my discerning taste buds, Henry’s proves a pleasant surprise. Chicken is tender and lightly glazed with a sweet barbecue sauce and moist all the way through. The pork ribs would be closer to grilled instead of slow smoked, they have excellent texture, pulling cleanly from the bone with only a gentle tug. It’s not Lockhart, but for San Jose – it’ll do. With a heaping pile of BBQ in front of me, cold Shiner on tap, and the Irish playing the despicable Trojans on of the television perched over the bar, it’s tempting to wallow away for a few hours in the dark pub. But, alas, a Spartans game beckons…

I take a customary tour of the San Jose State campus, a compact urban property that appears mostly a commuter school and lacks the sprawling beauty of its neighbors like Stanford and Cal. Strolling down the main palm tree lined walkway, a few tile roofed Mission Style buildings flank the main quadrangle, at the center of which stands a massive 22 foot statue erected in tribute to the 1968 Olympics “Black Power Salute”. The statue memorializes the political statements of SJSU alumni Tommie Smith and John Carlos. The two sprinters, both African American athletes, won Gold and Bronze, respectively, in Mexico City in the 200M. During the proceeding medal ceremony, they each stood on the podium in black socks, bowed their heads, and raised a lone black gloved fist into the air during the entire rendition of the Star Spangled Banner. Captured during the height of the US civil rights struggle, the photo of their protest, and subsequent imbroglio that followed, has become one of the most enduring images of a political statement made at a sporting event.

From campus, I make my way south a few blocks and find easy street parking on the corner of 8th and Martha Street. The residential neighborhood is quiet on a Saturday evening, a few dogs bark in the distance, the rattle of a few lawn sprinklers rhythmically tapping away. Tailgating is all but absent from the area, and it could be any peaceful family neighborhood in America……. That is, until you reach 10th and Alma Streets, where you’re thrust into the throbbing epicenter of a borderline riot. Loudspeakers crackle with the latest pop tunes, the grass crunches with empty beer cans and a potpourri of beer, smoke, sweat and sunscreen wafts over the area like a fog. Students are swarmed around trucks and tents like packs of wild jackals, crammed into the woefully undersized (and underserviced) lot provided to them by the University for tailgating. Caged like animals in the fenced parking lots surrounding Spartan Stadium, it’s like walking by a zoo. I don’t dare feed them.

Frankly, it’s a pleasant surprise to find so robust a student tailgating scene at a place like San Jose State. This is exactly the kind of loud, boorish, inebriated and unsterilized environment that student tailgating should be, and it’s alive in well in the tiny program. Across the street, in the older, more civilized alumni lot adjacent to Spartan Stadium, where the shitbox cars and compact trucks turn into luxury SUV’s and flat screen TV’s, I ply my trade on the ticket hunt. It’s not long before I track down my favorite ticket deal – a freebie – on the 40 yard line, courtesy of an old timer wearing a bright blue Spartans jersey over his pleated khakis.

I find my way to my seats along the aluminum bleachers, and shortly thereafter the SJSU squad scampers onto the field through a gauntlet formed by the band, their electric blue helmets gleaming under the light towers that encircle Spartan Stadium. One of the more underrated helmet designs in the sport, Spartan headgear is festooned with a colorful silhouette of a Spartan Warrior helmet. The design is also replicated at midfield in a bright mosaic of blue, white and yellow.

While the players continue the last few minutes of pre-game warmups, a bald, jort wearing, senior citizen clambers atop the concrete wall behind the player bench at midfield. Clutching a tambourine hand drum, the crowd cheers as he raises his hands, leading the stands in alternating chants of “San”….”Jose”…. like a denim clad pied piper. But after the PA announcer personally introduces “Krazy George” by name, it’s clear that this isn’t your run of the mill, boisterous lout.

George Henderson or “Krazy George” as he is affectionately known, may be the most famous (and amongst the “down in front” geezer crowd – reviled), sports fan in the world. It was here, in the Bay Area, at an Oakland A’s playoff game versus the New York Yankees on October 15, 1981 where Krazy George encouraged his entire section to stand and raise their hands in the air in unison, and then after encouraged the adjacent section to the same, thereby creating the first “Wave”. As Edison is to the light bulb, Crazy George is credited with inventing the crowd phenomenon known as “The Wave”.

Today the 71 year old Henderson still patrols the San Jose State sidelines, enthusiastically thumping away his large tambourine to get the audience’s attention. During periodic breaks in the action, he leads the crowd in various chants, always followed by his signature wave. A professional cheerleader by trade, Henderson’s resume is lined with appearances at dozens professional sports teams all over the country during his storied forty year career. But his cheering antics all started here, at a San Jose State Spartans game, where he attended as a student in 1968. Krazy George, a local legend if there ever was.

Unfortunately for the Spartan squad, despite having the world’s most recognizable cheerleader in their corner, they flounder on the gridiron. The San Diego State defense is smothering. They dominate the line of scrimmage, upending the porous Spartan offensive line, which is driven into the backfield on every snap. San Jose State quarterback Kenny Potter spends most of the evening scrambling for his life. Continually pursued by a pack of rabid Aztecs, he fires two interceptions on the night, while the entire Spartan offense squeaks out a meager 148 yards in total.

While the annihilation unfolds on the field, I spend the game chatting away with a pair of ardent Spartan fans seated beside me. Dave and Mary, the latter an alumnus, are both garbed in head to toe SJSU gear and make the faithful trek in every Saturday from their home in Gilroy. Eschewing any plans in the fall in favor of football, they’ve had season tickets to Spartan football for over twenty years now. Despite the mounting futility of the SJSU squad, the couple still rises, cheering wildly on key third downs. Even in tiny corners of the game, passionate devotees are the backbone of the sport, and Dave and Mary represent the best of that fandom. Despite their best efforts, and the hijinks of Krazy George, the Spartan empire crumbles before the Aztecs in a lopsided 7-30 defeat. But, fortunately, spirit is alive and well in the humble SJSU Spartan program…. 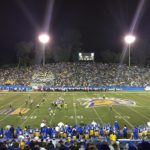 Drugs are sumptuous, and certain men cannot get the medicaments they need. Certain drugs are as a rule used to treat varied types of infection caused by certain types of bacteria, such as tonsillitis and infections of the throat. If you’re concerned about sexual problem, you probably know about http://isviagraoverthecounter.com/Male-Enhancement-Pills.html. What are side effects of Cialis? There are varied drugs for male impotence cure. Very likely Male Enhancement Pills Over the Counter is a very complicated topic. More information about Cialis available at best male enhancement pills over the counter. While the generic is credited with improving nausea, it may also kill the mood in bedroom. All kinds of medications, from those that are elaborate ‘all natural’ to those that are chemically produced in a laboratory, may cause some kind of aftereffects.