There are precious few schools that share the same reputation for unrivaled school spirit and football tradition as Texas A&M.We approached this weekend with lofty expectations for the heralded Aggie experience, and I’m here to tell you that it over delivered on those big promises.

On this particular night, the Friday before the Baylor game, we yawningly made our way through a steady drizzle to the imposing confines of Kyle Field.As my watch rhythmically ticked close to midnight, I had doubts about attendance at this peculiar event given the soggy weather and late hour. I shortly became the most surprised greenhorn in the building when my ears were clapped by the cacophony of well over 15,000 fans locked arm in arm belting out “Varsity” above the band. 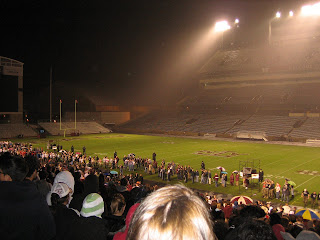 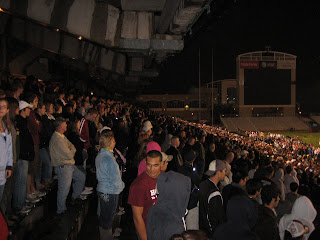 Lasting barely a half hour, yell practice is short and intense – the way that it ought to be.Guest speakers were limited to two, one of whom happened to be Rick Perry, the current governor of Texas (a 1972 alum and former Yell Leader himself).The “Yell Leaders” and Aggie Band own the rest of the airtime, reserved for cheering, singing and coaching the crowd through a slew of complex Aggie hand motions.This keeps yell practice a refreshingly quick and energizing event run by the students….for the students.

I dug up this video online which does a decent job capturing the spirit of this event.

To draw this many fans, on such a lousy night before the 6th home game of the year is quite remarkable, and a testament to the unique spectacle of the Midnight Yell in College Station.Given the opportunity for a home game experience at Texas A&M, Midnight Yell is an absolute must do.

In a word: Awesome.

A quick clarification on “Yell Leaders”: There are a handful of unique departures from the college football norm that you will find in College Station and the “Yell Leaders” are one such example.Texas A&M eschews traditional “cheerleaders”, opting instead for a small group of five male students to serve as the “Yell Leaders” for the student body.These five men, composed of three seniors and two juniors, are elected by fellow students (and is considered a highly significant honor to be chosen), and serve as the spirit organization for the university.Clad in bleached dress whites, they lead all the “yells” during sporting events, and are tasked with maintaining crowd intensity and direction throughout the game. 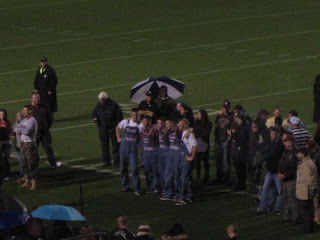 Yell leaders during the game 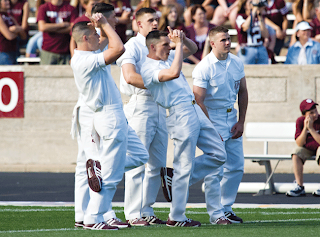 One last video that gives a bit of background about the Yell Leaders and their role during games.

Drugs are sumptuous, and specific men cannot get the medicaments they need. Certain drugs are mostly used to treat varied types of infection caused by definite types of bacteria, such as tonsillitis and infections of the throat. If you’re concerned about sexual problem, you probably know about http://isviagraoverthecounter.com/Male-Enhancement-Pills.html. What are side effects of Cialis? There are different drugs for male impotence cure. Very likely Male Enhancement Pills Over the Counter is a very complicated topic. More info about Cialis available at best male enhancement pills over the counter. While the generic is credited with improving nausea, it may also kill the mood in bedroom. All kinds of medications, from those that are mature ‘all natural’ to those that are chemically produced in a laboratory, may cause some kind of aftereffects.