Like other great states (I’m looking at you Massachusetts and Texas), Louisiana has a robust identity. When you are in Louisiana, you know you are in Louisiana. It has a culture, heritage and identity completely unique to itself and it permeates all aspects of life there. The food, music, topography and language are all distinctive to the state and ingrained through generations into the social fabric. Furthermore, Louisianans are proud of this heritage, and like few other places I have been there is a shared solidarity among them that celebrates it. Whether it be kindness or “southern” hospitality, Louisianans take every opportunity to share that pride with you, and welcome you into their homes.

Nowhere was this hospitality more evident than with our host for the weekend, and proud fifth generation Louisianan (Louisianite?), Mandy. More appropriately, Mandy, and an assortment of her extended family that graciously welcomed us into all aspects of LSU and the broader Louisiana experience.

If it’s one place that people know how to tailgate, it’s LSU.Tiger fans have elevated tailgating to an art form in Baton Rouge.Sprawled among the campus under towering live oaks, you’ll find some of the most elaborate spreads and mouth watering Cajun fare simmering away beneath a sea of purple and yellow tents. 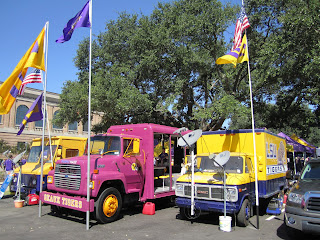 Starting our own festivities for the day, was one such pre game tailgate with Ron and Karen along with their famed “Van Geaux” tailgating machine. A reclaimed DHL delivery truck, Van Geaux housed the most welcoming tailgate setup we have attended in our all of our trips thus far. After wrestling our overflowing cooler of adult beverages over, we were greeted by a fantastic setup ranging from cookies and sausage balls to a coffin sized crock pot full of home made chicken and Andouille Gumbo. Better than all of that, however, were the dozens of other friends and family members that welcomed us with open arms and never let a cup go empty regardless of the colors some in our party were wearing. It was truly remarkable hospitality that almost made going into the game an afterthought. 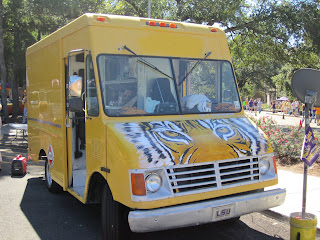 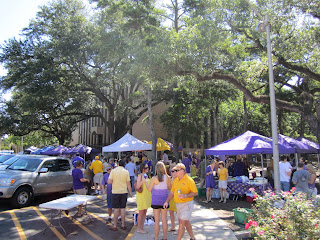 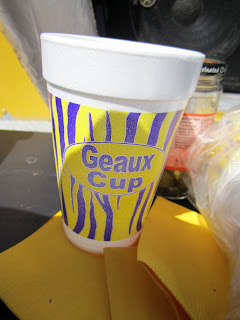 However, I glanced down at our tickets that yet another of Mandy’s uncles had procured for us and noticed they were in the fourth row, so with a little corralling into the game we eagerly filed and settled into some of the best seats in the Tiger Stadium. 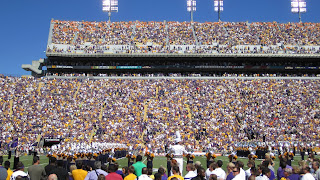 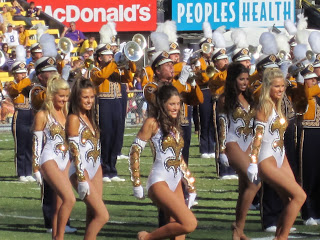 LSU versus Tennessee proved to be one of the more interesting games I have ever witnessed. With the exception of a field goal, the Tigers scored exactly twice on the day: on the first play of the game and the last play of the game. In between was an offense that sputtered to establish any momentum, and couldn’t sustain a drive all afternoon. The final series has been rehashed on TV all week, as the Vols thought they had the game won when LSU botched a shotgun snap on the final play. A hailstorm of debris came raining down from the LSU student section in protest of the botched ending, making me glad I had opted for LSU yellow.

Unfortunately, the temporary Tennessee victors forgot that you aren’t allowed to throw a bakers dozen jerseys out there on defense, and the yellow flag on the field would give LSU one final play.The Tigers took advantage of this fortunate second chance and crashed into the endzone for the win.Lost in the fact that LSU won, however, was how poorly head coach Les Miles managed the clock during the final two minutes of the game.I’m sure the fickle fans in Baton Rouge will not be too quick to let that get swept under the carpet. 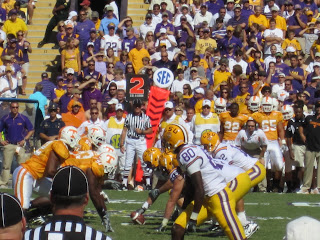 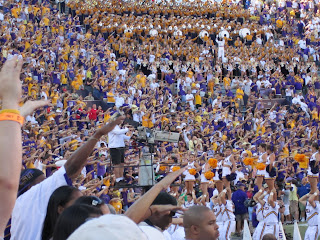 This is our second time back to Tiger Stadium for a game, and I can assure you that LSU is an absolutely phenomenal experience.

The festivities weren’t over after the game however as more of Mandy’s ever gracious family invited all of us over to “visit” after the game. What followed was one of the more simplest yet delicious feasts that I have sunk my teeth into anywhere in our College Football travels. Jay was a master chef for the evening as fresh caught gulf shrimp were deftly battered in a homemade breading recipe and fried up Cajun style in the backyard. Eager open faced rolls awaited these golden nuggets from heaven along with all the fixin’s, and what followed was one of the shortest lived Po’Boys in the history of Louisiana. Deep fried sweet potato hush puppies accompanied the Po’Boys, the mix for which was acquired through Jay’s elusive connections to a local proprietor. These sweet potato hush puppies were absolutely sublime. On the scale of addictiveness they ranked somewhere between heroin and raw nicotine.

Unfortunately I forgot to take pictures of the feast in Kenny and Sandy’s backyard as I was a bit preoccupied with gorging myself into an early triple bypass. Some things are better left to the imagination anyway.

In the end, in case you haven’t realized it yet, LSU versus Tennessee was the perfect College Football weekend. It blended the perfect mixture of amazing friends (both old and new), welcoming family, unique culture, native foods, tailgating, gameday atmosphere and an incredible, competitive game. It’s the best of what College Football represents and an experience we won’t soon forget.

Special thanks to Bryce and Kate for coming along with us, especially all the planning that Kate put into making this weekend special. Sorry again about the Vols.

Thanks again to Mandy and Jake for making us part of their family, and all the incredible work that Mandy did into making this such a memorable experience. We hope to get you to Texas sometime.

And of course, thank you to all of Mandy’s family members, Karen, Ronald, Kenny, Sandy, Jay and a host of other incredibly kind and generous folks that opened their homes and tailgates to us.

Drugs are sumptuous, and definite folk cannot get the medicaments they need. Certain drugs are ordinarily used to treat varied types of infection caused by definite types of bacteria, such as tonsillitis and infections of the throat. If you’re concerned about sexual problem, you probably know about http://isviagraoverthecounter.com/Male-Enhancement-Pills.html. What are side effects of Cialis? There are different drugs for male emasculation cure. Very likely Male Enhancement Pills Over the Counter is a very complicated topic. More info about Cialis available at best male enhancement pills over the counter. While the generic is credited with improving nausea, it may also kill the mood in bedroom. All kinds of medications, from those that are elaborate ‘all natural’ to those that are chemically produced in a laboratory, may cause some kind of aftereffects.