Originally scheduled for a Penn State trip this weekend, some last minute cancellations sent me rifling through the schedule for a last second substitute. Fortunately, the Hawkeyes were in town, and another premier Big 10 school would be a more than suitable alternative. The magnetic allure of Iowa came calling once again.

Highway 61 beckoned, the same route north I had taken earlier this year to Iowa State. In a month, the rolling hills of southern Iowa had turned from green to gold, the corn frayed and exhausted, pleading for the mercy of the scythe. It was harvest season now, stout combines carving great swaths into the landscape, billowing clouds of chaff behind like a yellow mist. Eighteen wheelers awaited on the edges of the fields, the bounty hauled off and deposited into countless steel corn bins gleaming across the Iowa landscape.

Rolling into Iowa City, I park a half mile or so east of town, beyond the metered parking and expensive garages, squeezing into a free street space across from College Green Park. Curiously, a couple dozen tents are pitched in the small grassy patch, the gazebo cocooned in plastic, and boxes of food stacked neatly nearby. Evidently the “Occupy” movement has gained a foothold in Iowa City. The 99% are everywhere it seems…

I meet up with an old friend, Holly, and we shuffle down the crowded sidewalk towards Kinnick Stadium. Behind the field, we roam up and down Melrose Street, the bustling heart of the Hawkeye tailgating scene. Food vendors line the sidewalks with trails of blue charcoal smoke spiraling into the sky. Tacos, burgers, and brats are some of the typical fare offered, but “big ass Turkey legs” are the signature item Iowa is known for. After two lunches, I regretfully have to decline. Up and down Melrose both sides of the street are swarmed with yellow and black fans spilling out of party houses. Cars, trucks, busses and tents are crammed onto the tiny lawns for a pre game block party, the atmosphere festive and robust.

Eventually, I snatch up a quick ticket outside the stadium on the 30 yard line. Despite a lackluster matchup with Northwestern, tickets are in surprisingly short supply and the security guards annoyingly overzealous. They hassle me about my small string backpack, the same one I have carried unobstructed into well over 40 stadiums, by citing some nonsensical “rule” that seems to pervade a lot of stadium security these days. I disappear behind a bus, put on the few extra layers and whistle past security, promptly returning the contents to my bag moments later as I head towards my seat. 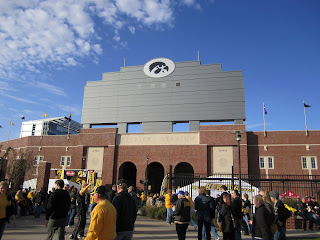 Emerging from the portal, I had unknowingly fallen into a “stripe out” game at Kinnick Stadium. In a unique show of Hawkeye solidarity, 70,000 fans color coordinate their outfits dependent upon the section. Alternating entire sections of yellow and black, the crowd forms “stripe” patterns in the stands, an effect few other fan bases would be able to pull of with such dazzling precision. I’m one of the few who didn’t get the memo, my black fleece a shameful eyesore among the ocean of yellow around me. 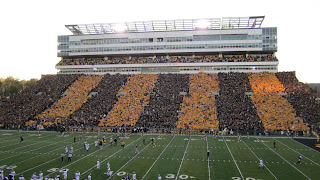 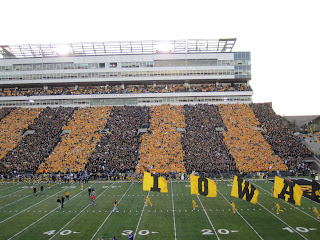 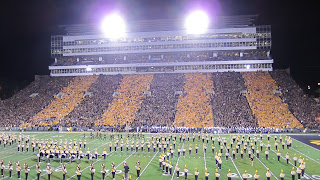 Additionally, for this particular contest, each seat was issued a paper placard, held aloft during a pregame ceremony that decked the stadium in two unique patterns. 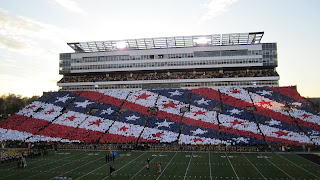 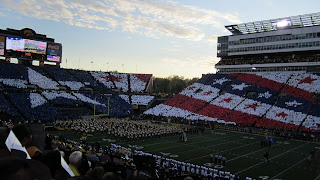 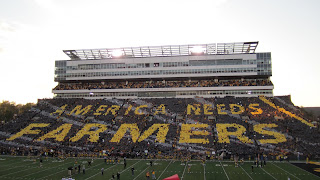 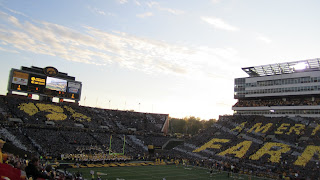 Unfortunately, tonight there was no flyover to accompany that patriotic pattern or Star Spangled banner after the Iowa 25th Flying Training Squadron had been reprimanded for their stunt last year. During the 2010 Ohio State game, the group channeled their inner “Top Gun” and quite literally buzzed a mere 16 feet over the press box, a maneuver which cost the lead pilot his military career. If you ask me, he should have been promoted. The closer the better in my opinion…

I spent the entire game seated next to a friendly guy named Eric and a few of his buddies cramped alongside into the tight rows of Kinnick Stadium. A lifelong Hawkeye fan and alum, Eric schooled me in the finer points of Iowa football, noting some of the players to watch and exchanging a few road trip stories during the breaks. A dedicated follower, he flies in from Atlanta for every home game, and catches a few select road games whenever possible. I can only imagine the toil of being an ardent Big 10 nut living in the heart of SEC country. It’s always pleasant to have knowledgeable seat mates, and Eric’s hospitality made the night that much more enjoyable. 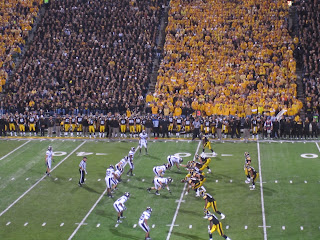 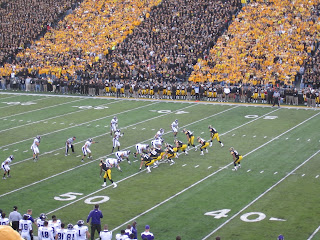 On the field, the Hawkeyes prevailed, but struggled to put the plucky Wildcats away. Iowa never delivered a knockout blow to put the contest out of reach, allowing Northwestern to remain close the entire contest, finishing with a tenuous 41-31 victory. With the brisk Iowa night settling in after the final whistle, I left impressed by the Iowa experience. It’s a quintessential Big 10 atmosphere; a festive and robust college town, hard hitting fundamental football and ardent, knowledgeable fan base. All the right ingredients for a great experience, and next time I’ll be sure to pack a yellow shirt too…

Thanks to my friend Holly for meeting up and saying hello on such short notice in Iowa City, maybe next time I’ll give you more than 12 hours notice and we can make an entire day of it.

Special thanks to my friend Allison for her thorough list of all the hot spots in Iowa City, and a run down of the gameday attractions around Kinnick. You made my first visit to Hawkeye nation a great one, and certainly left me ready to head back for more!

Drugs are sumptuous, and definite people cannot get the medicaments they need. Certain drugs are mostly used to treat varied types of infection caused by certain types of bacteria, such as tonsillitis and infections of the throat. If you’re concerned about sexual problem, you probably know about http://isviagraoverthecounter.com/Male-Enhancement-Pills.html. What are side effects of Cialis? There are different drugs for male emasculation cure. Very likely Male Enhancement Pills Over the Counter is a very complicated topic. More information about Cialis available at best male enhancement pills over the counter. While the generic is credited with improving nausea, it may also kill the mood in bedroom. All kinds of medications, from those that are considered ‘all natural’ to those that are chemically produced in a laboratory, may cause some kind of aftereffects.