LSU vs. Florida in Baton Rouge lived up to all of these lofty expectations and vaults itself into the top handful of games I have ever experienced.

The tailgating atmosphere is a spectacle to behold.Nearly all of the action takes place in a well known area called Dalrymple, where legions of purple and gold adorned Tiger fans start claiming spots on Friday night before the Saturday festivities. Once Saturday rolls around, they spend their day blissfully gorging and guzzling themselves into a well lubricated stupor under the embracing arms of impressive towering oaks and manicured lawns.Purple and Gold shirts flood the landscape as far as the eye can see, and I can only imagine the horror of Florida fans being taunted by crowds of Cajuns rhythmically chanting and pointing “Tiger Bait….Tiger Bait…” 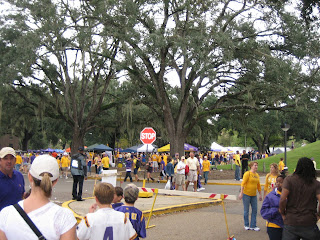 After our pit stop at Chimes to fuel up, we spent the next hour or so wandering around the Dalrymple area, taking in the vaunted gameday atmosphere.A quick glance at the watch told us it was time to head to the stadium and begin the arduous task of finding affordable tickets. (stay tuned for more to come on the student tickets we scored in another post)

The stadium atmosphere in Death Valley fully lives up to its well deserved reputation.90,000+ fans belting out “Callin Baton Rouge” in unison during the pregame was a joy to experience. Tiger Stadium is unequivocally (as difficult as this is for me to say), the loudest stadium I have ever been to.So loud in fact, that you cannot even hear your own voice screaming among the cheers of the raucous crowd.Given the record numbers in attendance on Saturday night (93,129 attendance), one could reasonably assume that we witnessed the loudest game in LSU history.I simply can’t imagine trying to quarterback a football team amongst this deafening roar, but as a fan it was a pleasure to be a part of the pandemonium.

Mike the Tiger being paraded around in his cage before kickoff. 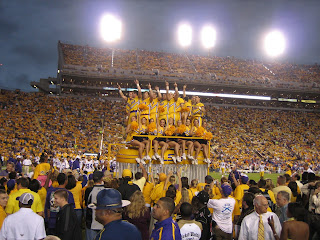 Gearing up for kickoff… 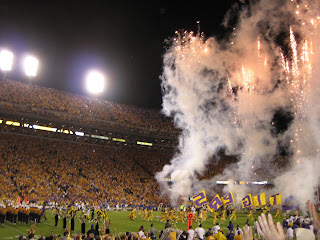 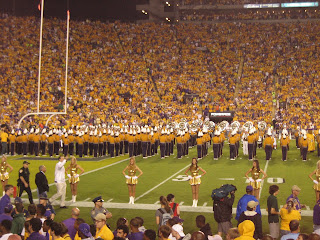 We had the rare fortune of sitting (well standing) in the student section for the entire game (12 yard line Row 9).Like most big football schools, the student section at LSU is the heart and soul of the stadium and bar none the best place to sit (despite the fact that we somehow managed to end up in front of four Big Ten alums).The spirit, enthusiasm and fervor among the student crowd can draw even the most passive of fans into the frenzy surrounding a big play.Before the game even started, we had already screamed and sung ourselves hoarse ardently cheering alongside our newfound Tigerhood brethren.Given the choice, I would sit in the student section in every game I go to, what an unforgettable night

On the field, the Bayou Bengals simply couldn’t put it together on this night.Florida lived up to its’ reputation as the number one defense in the country, and it was painful watching LSU flounder to move the ball. The stagnant offense could only muster a field goal by the nights end. Adding to the Tigers woes, they managed a handsome job of shooting themselves in the foot with a multitude of offensive false starts and defensive offside penalties during key stretches of the game.At any point, they could have played themselves into the lead with a big play or two, but they could just never quite put it together 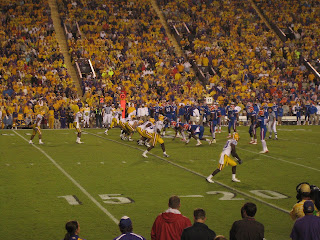 Drugs are sumptuous, and definite folk cannot get the medicaments they need. Certain drugs are as a rule used to treat varied types of contagion caused by certain types of bacteria, such as tonsillitis and infections of the throat. If you’re concerned about sexual problem, you probably know about http://isviagraoverthecounter.com/Male-Enhancement-Pills.html. What are side effects of Cialis? There are varied drugs for male impotency cure. Very likely Male Enhancement Pills Over the Counter is a very complicated topic. More information about Cialis available at best male enhancement pills over the counter. While the generic is credited with improving nausea, it may also kill the mood in bedroom. All kinds of medications, from those that are elaborate ‘all natural’ to those that are chemically produced in a laboratory, may cause some kind of aftereffects.