Some times things just have a way of working out….

And turning into something amazing.

I had to cancel my Notre Dame trip originally planned for last weekend because flight costs had risen egregiously high, and I couldn’t justify the spend for a trip to South Bend. As luck would have it, a work trip brought me to Charlotte, North Carolina on Friday and I ended up falling into an offer for tickets to the South Carolina vs. Alabama game. Sometimes it’s better to be lucky than good, especially when your tickets end up being in the second row on the 40 yard line (not so subtle brag). Needless to say, watching the #18 Gamecocks hosting the #1 Crimson Tide was an opportunity not to be missed, and I gladly made the quick ninety mile jaunt down to Columbia on Saturday morning.

After finishing up tailgating (posted below), I hustled into Williams Brice stadium a bit early. Given that this was shaping up to be an epic tilt inside the “Cockpit” it was clearly going to be a mob scene getting in and I didn’t want to miss a minute of their fabled “2001 Space Odyssey” entrance. Considered one of the most unique entrances in all of college football, “Cocky” the mascot and the rest of the Gamecocks take the field to the tune of Stanley Kubricks famous score from “2001 Space Odyssey” accompanied by the thunderous roar of over 82,000 fans. It was a unique, energizing, intimidating and deafening experience, all the things a great entrance should be. 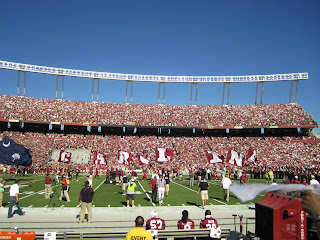 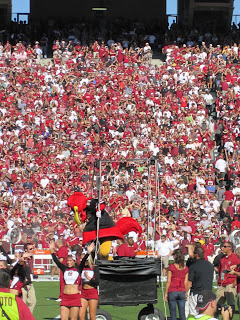 As for the game itself, unless you spent last weekend under a rock, you already know that I witnessed one of the most spectacular upsets all season, and certainly the biggest victory in Gamecock history. I guess I know how to pick em’. To put it in perspective, South Carolina had never upset a #1 ranked team, and had only beaten a top five team twice before in history. Alabama had looked nearly invincible for the last two years, yet the Gamecocks absolutely dominated them on both sides of the ball, strutting away with a convincing 35-21 victory. 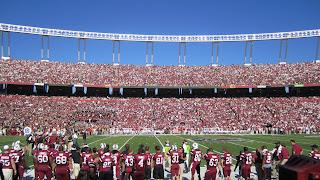 Remarkable about the win, however, was the way the Gamecocks won. They completely shut down the Alabama rushing duo of Mark Ingram and Trent Richardson. They also pierced the massive Alabama offensive line, which, from my perspective, looked like a herd of mastodons on the field. On offense, they took it right up the gut on the Crimson Tide, amassing 110 yards rushing on the day behind phenom freshman running back Marcus Lattimore (I guess he gets a “seat at the table” for that performance – kudos if you get that reference). One such rushing series included a spirit crushing eight minute touchdown drive to grind out the third quarter. I guess the Ol’ Ball Coach still has a few tricks up his sleeve. 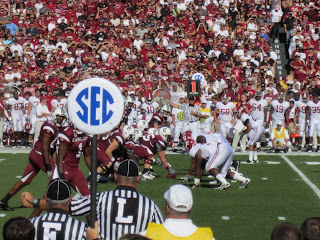 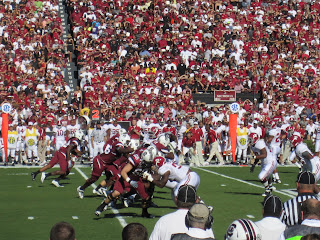 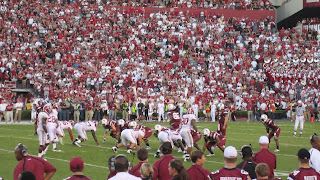 The in stadium atmosphere on the day was expectedly spectacular. This is SEC football after all, and yes, it is different. As you can imagine, fans were in a frenzy during the beginning of the game, but the energy level was sustained for nearly the entire contest given how close it was. At one point, the concrete floor was discernibly vibrating beneath me and aluminum benches sure make for incredible noise makers. This was a standing only affair, and the entire stadium only reposed for the half time show.

In fact, on the way out of the stadium, fans were singing and cheering inside the tunnel, still euphoric from the win. I had an interesting exchange with a random older South Carolina fan while shuffling out with the crowd.

Random Fan in deep southern drawl: “I’ve been coming here for twenty eight years and I ain’t never seen nothing like this…”

Me: “This is my first ever game at South Carolina”.

Random Fan in complete shock: “Boy, you sure picked one helluva game for your first time”

Me: “Yeah, maybe you’d like me to come back here more often if this kinda thing will happen?”

Random Fan: “Son, I will PAY you to come back here again for this.”

The only bone I have to pick on the day lies more with the SEC than it does with South Carolina in particular. Evidently the SEC has the foolish rule of preventing students from rushing the field after a win. Should the school allow the students onto the field, students will be arrested and the school fined $100,000. As such, there was an armada of security personnel and SC State Troopers lining the field during the final few minutes, to prevent any “unruly” fans from leaving the stands to celebrate with their team. Personally, I think rushing the field is one of the more unique and appealing aspects of College Football. If you’re team just knocked off the #1 team in the country, there is no compelling reason why those fans, and especially students, shouldn’t be allowed onto the field in celebration with their team. Do better SEC. 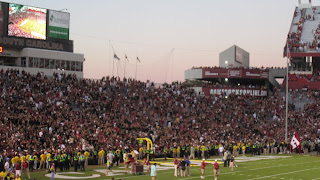 Despite the arcane SEC rule, this was simply an unforgettable experience that happened to fall right into my lap. South Carolina fans are noted for their passion and dedication to the team, and it was evident throughout my entire raucous gameday experience in Columbia.

Drugs are sumptuous, and specific folk cannot get the medicaments they need. Certain drugs are ordinarily used to treat varied types of infection caused by certain types of bacteria, such as tonsillitis and infections of the throat. If you’re concerned about sexual problem, you probably know about http://isviagraoverthecounter.com/Male-Enhancement-Pills.html. What are side effects of Cialis? There are different drugs for male impotence cure. Very likely Male Enhancement Pills Over the Counter is a very complicated topic. More information about Cialis available at best male enhancement pills over the counter. While the generic is credited with improving nausea, it may also kill the mood in bedroom. All kinds of medications, from those that are considered ‘all natural’ to those that are chemically produced in a laboratory, may cause some kind of aftereffects.