After such a remarkable experience thus far in Oxford, the biggest lingering question in my mind was if the game atmosphere at Ole Miss could possibly live up to the impossible bar set thus far.

To borrow irritating corporate jargon, my “expectations were managed” all afternoon by Ole Miss faithful claiming that the highlight of the day would peak at tailgating in the Grove.Sadly, they lamented, the in stadium atmosphere at Vaught Hemingway Stadium was decidedly average, especially within the context of some of their other bellowing SEC brethren. 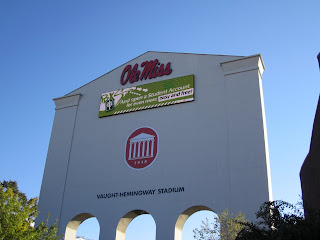 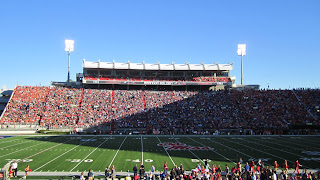 For the most part, I would have to agree.While it’s still certainly an SEC game on the field, the crowd noise and overall levels of enthusiasm were, for the most part, fairly average.While the Rebels gave their fans some excitement on the second play of the game, when running back Jeff Scott dashed away for an 83 yard touchdown, there was little to cheer about after the first quarter.The stands became visibly empty about midway through the third quarter, as folks presumably retreated back to the comfort of the Grove. 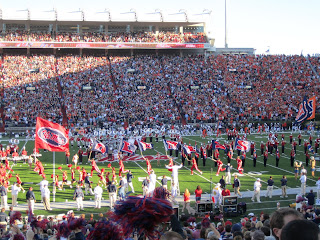 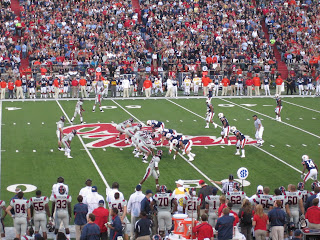 On the field vaunted Auburn quarterback Cam Newton was able to sit comfortably in the pocket and pick apart the Rebel defense all day, amassing 274 yards of offense on his own including two passing and one receiving touchdown. The Auburn attack lit up the box score with 572 yards of total offense, staking their claim to move up the BCS ladder. Jeff Scott was the lone bright spot for the Reb’s on the day scampering for 134 yards, and as a freshman, he’s certainly a player to keep an eye on in the future. 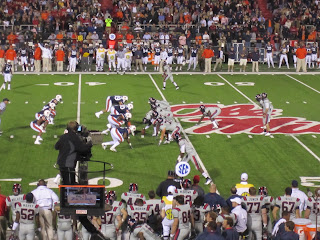 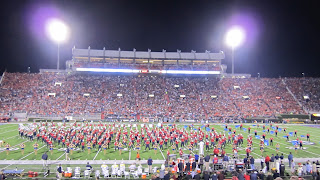 I spent all four quarters of the game parked next to Emmet and his father Bob, both long time diehard Ole Miss fans. I had purchased Emmet’s extra ticket after being connected with him through Casey at the tailgate, who had assured Emmet that while I wasn’t an Ole Miss alum I would be cheering loudly for the Rebels on this day. Perched 23 rows up on the 40 yard line, we had a perfect view of all the action. Both extremely knowledgeable and friendly Ole Miss fans, Emmet and his father schooled me on the finer points of the teams history, and continually pointed out the important playmakers on the field. Unlike some of their earlier departing brethren, Emmet and his father dedicatedly stayed all four quarters and I couldn’t have asked for a couple of more amiable seat mates. 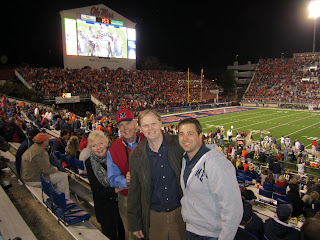 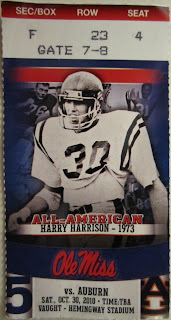 Thank you again to Casey for finding me the ticket to the game. Thanks to Emmet and Bob for sharing that extra ticket with me, and sorry we couldn’t get loud enough to cheer the Reb’s on to victory.

Also thank you to Jay for passing on some additional recommendations for the weekend, and similarly it would be great to meet you out there next year along with your family.

Finally, a very special thank you to my colleague Elizabeth for providing such detailed and extensive recommendations for the entire weekend. All of your reco’s were spot on and made for such an incredible weekend. Hopefully we can cross paths in Oxford next year.

Drugs are sumptuous, and specific men cannot get the medicaments they need. Certain drugs are mostly used to treat varied types of infection caused by certain types of bacteria, such as tonsillitis and infections of the throat. If you’re concerned about sexual problem, you probably know about http://isviagraoverthecounter.com/Male-Enhancement-Pills.html. What are side effects of Cialis? There are different drugs for male emasculation cure. Very likely Male Enhancement Pills Over the Counter is a very complicated topic. More data about Cialis available at best male enhancement pills over the counter. While the generic is credited with improving nausea, it may also kill the mood in bedroom. All kinds of medications, from those that are mature ‘all natural’ to those that are chemically produced in a laboratory, may cause some kind of aftereffects.