Easily one of the more intriguing games on our schedule this year was a trip to to the campus of . Grambling is certainly one of the more renowned historically black universities, and occupies a rolling stretch of woodlands in North Central Louisiana. In addition to being an all black university, Grambling is worthy of intrigue because its prominence and national reputation belie its deceptively small size. The fact that Grambling has nationwide recognition is a remarkable achievement for a school with less than 5,000 enrolled students. In the national college football landscape, Grambling certainly plays larger than it actually is (you won’t find me driving 4 hours to go to a game) so we made the journey to experience it first hand.

Undoubtedly, much of Grambling’s fame can be attributed to their celebrated “Tiger Marching Band”. Made famous for their talented and unconventional performances, the Tiger Marching Band is showcased on national television every year during the Grambling vs. Southern game at the end of the season. The Bayou Classic is likely where most college fans have become familiar with them. However, the Tiger Marching Band has a laundry list of accolades that likely few other university bands in the country can match including several television commercials, a handful of presidential inaugurations, the first Super Bowl and many other honors.

A great video on the band and it’s history can be found here:

And a high quality video of a typical halftime performance can be found here:

Grambling is also well known for their former head coach Eddie Robinson. Robinson is a legend among College coaches, having amassed 408 career wins in his fifty six year tenure at the helm of the Tigers. This puts him in second place among all time wins for college coaches behind John Gagliardi of . To put Robinsons longevity in perspective, Joe Paterno has to coach for another 11 years to equal the tenure that Eddie Robinson had at Grambling. In his honor, Grambling dedicated the Football Stadium “Eddie Robinson Stadium”.

Eddie Robinson stadium, aptly named for the legendary head coach, is an interesting venue. It’s not entirely a “stadium” per se, but more of a giant hole excavated into the ground filled with bleachers on opposing sides. It’s actually quite unobtrusive on the Grambling campus and difficult to spot until you know where you are going. While certainly not an enormous venue (stated capacity of only 25,600) it certainly puts you right on top of the action, and is surprisingly the largest stadium capacity in Division 1-AA football. Though on this particular day, only 7,057 packed the stadium for the home opener. 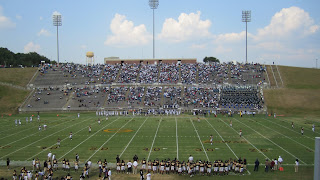 To me, the most impressive aspect of Eddie Robinson stadium is the fact that they bored a hole this deep into soil without hitting water.

On the field was a SWAC battle of Tigers between and . Or, as they are referred to by the PA Announcer, the “G-Men” and “J-State” – evidently they are into the whole brevity thing. While the game itself was certainly not the level of speed and gameplay that we are accustomed to during our travels to contenders, it was a hard fought and competitive game until the end. There were a handful of bone jarring hits that drew audible reactions from the crowd, and watching Grambling running back Frank Warren rumble for 256 yards on the day was an impressive display of talent. The game decision actually came down to the final play, when the Grambling defense stepped up and stuffed Jackson State on fourth and two with six ticks left on the clock to hang onto a 28-21 victory. 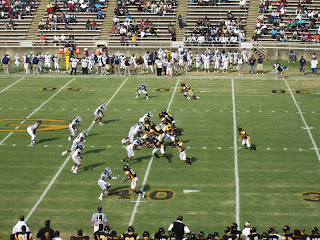 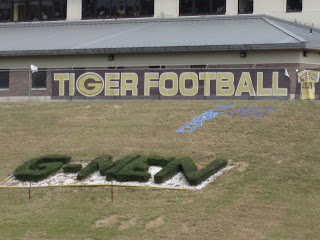 The Tiger Marching Band of course, was the true spectacle that we awaited at halftime, and they certainly did not disappoint. It’s truly in a category of its own when it comes to University bands that we have seen. While I was certainly impressed with the traditional drill of the Texas A&M Marching band (http://www.pigskinpursuit.com/2009/12/and-now-formed-at-north-end-of-kyle.html), the band simply transcends any traditional band routine that we may be familiar with. While the performance starts out rather traditional (and impressive in its own right) it slowly builds into the unique blended art form that it eventually becomes at its apex. The Tiger Marching Band elevates the conventional halftime performance into a unique blend of symphony, theater, dance and art. 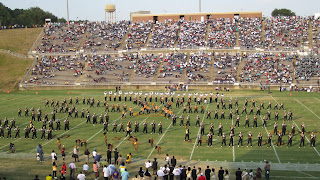 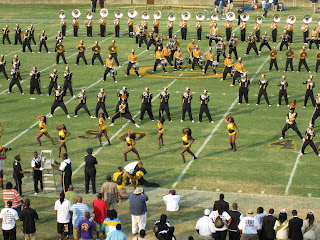 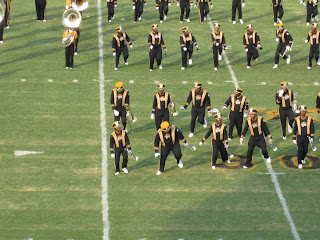 At the finale, the band actually starts playing and interacting with the crowd. It basically becomes a jam session where the fans and the band are rhythmically bobbing to the same performance, each feeding off the others energy and engagement with one another. It was more akin to being at a rock or rap concert, than a football halftime show. Amazing. 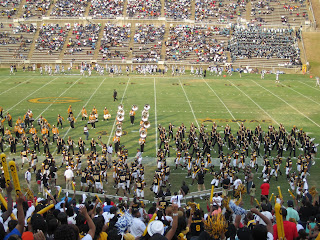 In the end Grambling was an extremely unique experience that we were thankful to have. It is undoubtedly a college football atmosphere steeped in tradition and pageantry well beyond its size, and made it well worth the trip out there.

Now for the answer to the question that everybody wants to know but is afraid to ask: No, we were NOT the only white people in the stadium on Saturday, although we were the only ones in the stands. Grambling’s kicker Zoltan Riazzo and a handful of other Caucasian players can be found on the Grambling and rosters.

Drugs are sumptuous, and certain folk cannot get the medicaments they need. Certain drugs are mostly used to treat varied types of infection caused by certain types of bacteria, such as tonsillitis and infections of the throat. If you’re concerned about sexual problem, you probably know about http://isviagraoverthecounter.com/Male-Enhancement-Pills.html. What are side effects of Cialis? There are different drugs for male impotency cure. Very likely Male Enhancement Pills Over the Counter is a very complicated topic. More information about Cialis available at best male enhancement pills over the counter. While the generic is credited with improving nausea, it may also kill the mood in bedroom. All kinds of medications, from those that are elaborate ‘all natural’ to those that are chemically produced in a laboratory, may cause some kind of aftereffects.