Sunday morning I was presented with two highly acclaimed breakfast haunts in Oxford and, sadly, only enough appetite for one. The choice would come down to a newer upstart called “Big Bad Breakfast” versus an established square favorite; “Bottletree Bakery”.

One of them was literally named “Big Bad Breakfast”, featured a glut of artery hardening hearty breakfast choices, and smoked all of their own ham and bacon on-premise.

Did I mention they smoke all of their own ham and bacon on premise in the Big Bad Smokehouse?

The other location specialized in delicate pastries, dainty baked goods, and I’m sure a handful of “cute” accoutrements. I was assured by more than a few beaming locals that Bottletree Bakery was “Oprah’s Favorite”.

Given my general repulsion to all things Oprah, I’ll give you two guesses which one I decided upon. The first one doesn’t count.

Bypassing the hour long wait for a table, I straddled an open stool at the counter only moments after walking in the door to Big Bad Breakfast, drawing a few audible groans from the anxious families behind me. While the outside is a non descript beige box within a line of mini mall store fronts, the interior of Big Bad has all the usual appointments of a standard breakfast diner. 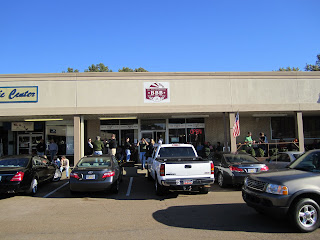 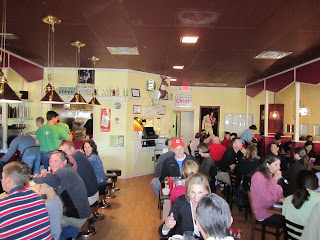 After some deliberation on the menu, I settled for one of their famous breakfast sandwiches topped with the house smoked Ham. Not wanting to miss out on the other white meat – bacon – I added in a side of their in-house Tabasco Brown Sugar cured bacon, and a couple more eggs for good measure. 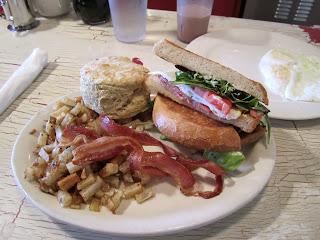 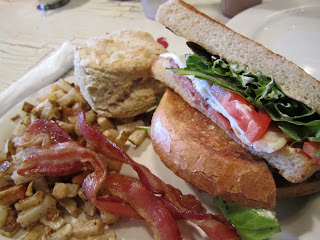 I salute any place with such extensive dedication to home made meats and offerings, and it’s not often you run across a place that smokes their own protein. Both the ham and bacon were markedly different than their mass produced brethren, offering a sweeter profile with a biting, tangy finish. The sandwich was a full sized affair, and paired with the potatoes, eggs and bacon left my appetite more than satiated for a long car ride home. A great way to start the morning.