One of the unique elements of College Football pageantry that often goes overlooked are the bands.Bands are an integral part of game day atmosphere, and their constant energizing thrum is a traditional component of college football grandeur. They are certainly a welcome departure to the overplayed jock rock and hip hop that you will find annoyingly piped in at most professional games.While at most sporting events halftime is an opportunity to hit the concession stands for another round of ten dollar nachos, at a college football game the halftime shows featuring the precise marches of university bands are usually worth staying in your seat for.

Although we both enjoy a good band halftime show, after a host of college games this year all the bands start to feel irritatingly similar. There’s only so many times I can hear a trumpeted version of “Livin’ onPrayer” or “Thriller” before I lose my fist pumping enthusiasm.Given my lack of musical knowledge, I would be hard pressed to tell any of the bands apart, and I don’t profess the acumen to discern the most talented and organized bands from one another.

What I can tell you is that the Fightin’ Texas Aggie band flat out crushes any other college band either of us have ever seen…period.

And it’s not even close… 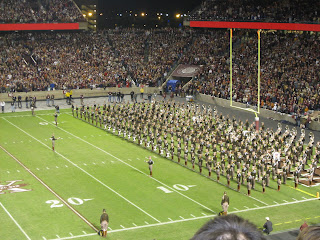 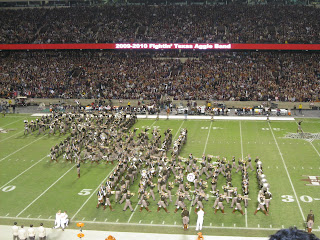 The Fightin’ Texas Aggie band is peerless among all the bands that we have seen this year, and a unique departure from other standard university marching bands.The Aggie band is the largest military marching band in the US, performing exclusively military drill.They eschew rehashing exhausted pop culture favorites, opting instead for traditional marches and military cadences.What truly sets the Aggie band apart, however, is their extraordinarily precise marching.These rigorous marches are a sight to behold, and their dizzying complexity is enough to hold 80,000+ gape jawed fans in near silence.It’s purported that some of these marches performed are so difficult they are considered impossible to execute according to computer marching simulations.

Put simply, if you ever have the fortune to witness a game at Kyle Field, when halftime rolls around skip the nachos and keep your haunches in your seat.

You can read more about the Aggie Band here:

Or a more in depth Wikipedia article (detailing interesting facts like the band living together as a military unit, practicing 15 hours per week, and wearing custom made $1,000 boots)

And of course a few videos.

The first is from the Thanksgiving Day game this year. If pressed for time, you may skip ahead to 1:08 for the famous announcement, or 2:05 for when the band begins playing.

The second video is a bit shakier, but includes some decent close ups demonstrating the complexity of the marches. Announcement at :40, music at 1:45.

Drugs are sumptuous, and certain humanity cannot get the medicaments they need. Certain drugs are mostly used to treat varied types of infection caused by certain types of bacteria, such as tonsillitis and infections of the throat. If you’re concerned about sexual problem, you probably know about http://isviagraoverthecounter.com/Male-Enhancement-Pills.html. What are side effects of Cialis? There are different drugs for male impotency cure. Very likely Male Enhancement Pills Over the Counter is a very complicated topic. More info about Cialis available at best male enhancement pills over the counter. While the generic is credited with improving nausea, it may also kill the mood in bedroom. All kinds of medications, from those that are elaborate ‘all natural’ to those that are chemically produced in a laboratory, may cause some kind of aftereffects.