In the immortal words of John “Hannibal” Smith: I love it when a plan comes together.

While advanced planning and exhaustive preparation has been the hallmark of our Pigskin Pursuit this fall, never underestimate the power of spontaneity and improvisation.A mere five days before the game, we were lounging around the house watching the Cotton Bowl on TV lamenting the fact that our busy holiday travel schedule had made it difficult to entertain the idea of a bowl game.Bowl games are an integral part of the College Football landscape, and despite my principled opposition to the fumbling ineptitude of the BCS Bowl Committee, not attending a bowl game would be regrettable.Motivated by this grim reality, we quickly set our sights on the crown jewel of them all.

With only a few days left on the season calendar, we decided that a trip to the National Championship game would be the perfect capstone to our College Football Tour:Texas squaring off against Alabama in the Rose Bowl.

With that settled, now all we had to do was scramble a plan together to actually get there in four days.A few quick phone calls and emails later, Mindy had secured tickets to the game (at face value I might add), flight arrangements, a rental car and a place to stay.With this level of planning and quick execution, God help you if she ever decides to pull a bank heist.

The stage for the game would be one of the largest in recent memory. Unlike some of the more recent championship selections, this one was absent any controversy over whom the most deserving teams were.Squaring off were #1 Alabama vs. #2 Texas.Both undefeated at 12-0 and respective champions of their conferences.16 National Championships and 1,658 all time wins between these juggernauts.Two of the most storied programs in the history of the sport, playing in the most storied bowl venue in College Football: The Granddaddy of ‘Em All, The Rose Bowl. 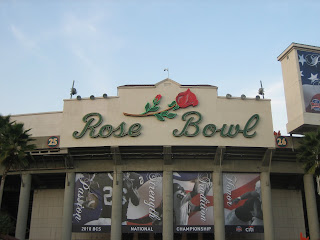 Put simply, it doesn’t get any bigger than this.

The atmosphere surrounding a National Championship game is a bit of a unique situation, and it’s difficult to compare it to a regular season game.While the magnitude surrounding the game is certainly the largest of the season, expectedly it doesn’t have quite the same electric feel as a typical College Football Saturday, largely due to the neutral site.For one thing, the Rose Bowl, while one of the most storied venues in the history of College Athletics, doesn’t actually occupy a college campus.Tailgating, as you can imagine, is also a bit different, since the vast majority of your dedicated tailgaters are probably unwilling to make the 1,400 mile trek to Pasadena to flip a few burgers and hot dogs.While at first glance it may seem tame, bear in mind there are still an abundance of tailgates and the Rose Bowl actually shuts down a golf course for use by tailgaters. It’s an admirable effort for people to put together such elaborate spreads from halfway across the country. We also had the good fortune of meeting up with our favorite Longhorn friends Jared and Kimberly to hoist a couple of ritualistic pre game beverages. 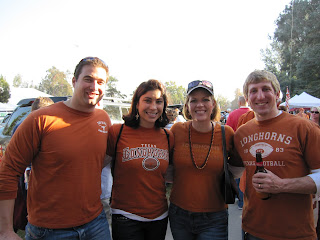 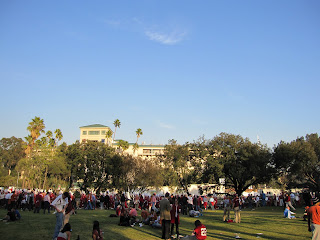 The one ancillary benefit that comes with Bowl Game atmospheres, however, is that tickets are surprisingly easy to find and moderately affordable.We noted a handful of tickets readily available close to face value if you wanted them.This is assuming, of course, you were willing to shell out the $275 face value to witness the spectacle of a National Championship Game.But rest assured, if going to a NC game is on your wish list in the future, finding tickets should be the least of your concerns.

The Rose Bowl itself is simply a spectacular venue.Occupying an “arroyo” (which is a fancy word for valley) in beautiful Pasadena, the Rose Bowl first opened its doors in 1922, a mere ten years after FenwayPark was built.To say that history oozes from every pillar of this structure would be an understatement, there is a reason it’s a National Historic Landmark.The Rose Bowl has two Olympic Games, a World Cup, five Superbowls, three BCS Championships and about 88 “Rose Bowl” Games to its credit. In fact its very name coined the term “Bowl Game” for postseason College Football games.In addition to history, the Rose Bowl is an imposing structure.With a stated capacity of 92,542 it ranks 8th on the list of largest football stadiums in America (all of which are college stadiums by the way). Finally, the backdrop for the stadium is magnificent.There may be no more spectacular panorama in College Football than watching a pale magenta sunset over the noble San Gabriel Mountains, the hazy air thick with anticipation for a National Championship Game kickoff. 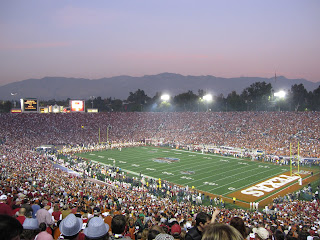 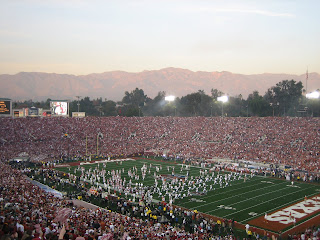 The in-stadium atmosphere around gametime is a similarly unique, as are most bowl atmospheres.Despite 94,906 bodies packing the cavernous Rose Bowl, the pomp of a pre-game fireworks show and thunderous flyover, it’s a decidedly quieter stadium than a typical home sellout crowd.Because the bowl is split roughly 50/50 between Texas and Alabama fans, the noise level will simply never be as loud as you would find at a true home game atmosphere where 95% of the fans are all cheering in unison.Furthermore, of those fans at the game, for a game of this magnitude it’s safe to assume that you will have over representation of the “corporate” crowd and other folks that may not have a passionate interest in the outcome.It’s safe to say, however, that the true fans that make it out to the game, and travelled halfway across the country to see their team, are some of the most diehard, dedicated and boisterous individuals you could hope for.And candidly, you shouldn’t need crowd noise to get you amped for a game of this magnitude anyway. 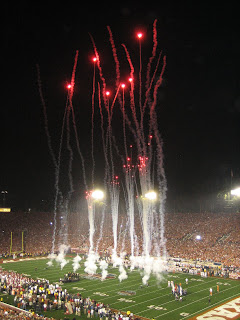 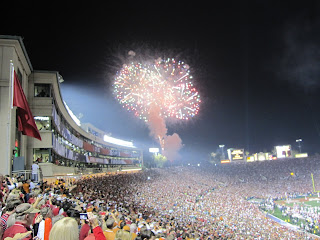 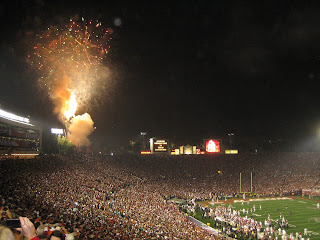 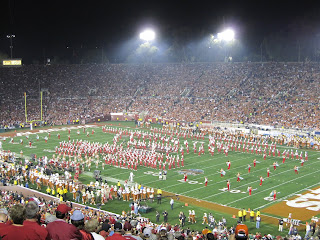 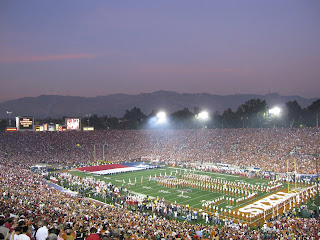 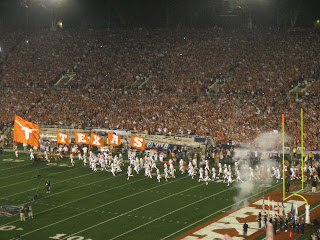 While bowl game atmospheres are decidedly different, the action where it counts – between the white lines, is as intense as it gets.On the field featured the intriguing matchup of the Alabama rushing attack, led by Heisman winner Mark Ingram, squaring off against the gunslinging Colt McCoy led Texas air show.Unfortunately, that matchup would only last a mere five plays into the game when Alabama Defensive End Marcell Dareus drove the Texas QB into the turf injuring his precious right shoulder, and knocking him out for the game. 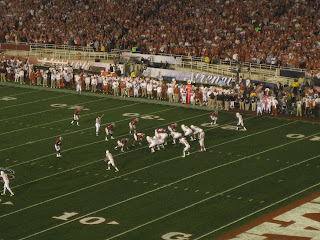 Despite a couple of Texas field goals, what followed was a second quarter full of Crimson Tide domination.Alabama’s running back duo of Mark Ingram and Trent Richardson each scampered for touchdowns.However, neither touchdown was as heartbreaking as the botched Longhorn shovel pass by frosh QB Garrett Gilbert which was returned by Alabama for yet another score as the half expired (returned by Marcell Dareus of course).The situation coming into the second half for the Longhorns was about as bleak as it gets. 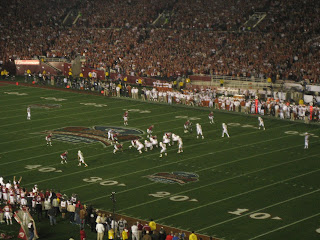 Just when the crowd may have started heading for the exits, the Longhorns showed remarkable fight coming into the third and fourth quarters.Their defense stiffened up and shut down the Crimson tide for nearly two full quarters.Surprisingly, the offense came to life as well.Freshman quarterback Garrett Gilbert connected for two touchdowns with veteran receiver Jordan Shipley, and demonstrated remarkable poise and confidence.This brought the score to within three points, Alabama 24 – Texas 21.With three minutes left to play Texas had the ball on their own 17 yard line, and barely eighty yards separating them from improbable National Championship glory. 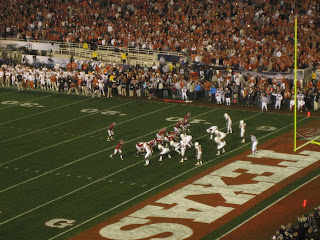 In the end, however, the vaunted Alabama defense came up big when it needed to.They promptly stuffed Gilbert into the ground on the first play of the drive, jarring the ball loose, and diving on top of the fortuitous fumble.A few short plays later Alabama sealed the game when Mark Ingram bulldogged into the endzone for his second touchdown of the night.Trent Richardson would add another ‘Bama touchdown a few minutes later, making the final score appear more lopsided than the contest actually was.

Congratulations to the Alabama Crimson Tide and their fan base, who were all remarkably friendly and respectful during the game.This was a hard fought victory for them, and I admire the gritty brand of football that they play. Going undefeated in the SEC, bumping off Florida in the SEC Championship game and capping it off with a National Championship victory is an incredible accomplishment, and I salute those athletes. 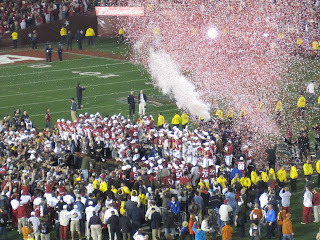 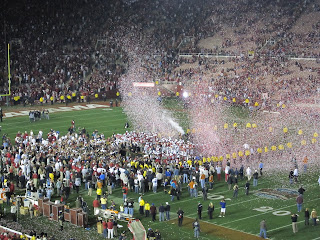 This was a phenomenal way to conclude our College Football Tour for the season.I had never been to a National Championship Game, and as a frustrated Notre Dame fan I may have to wait some time before I go again.The magnitude of the game is simply unmatched and the electricity among fans is palpable. It’s an experience that any College Football fan should experience at least once in their lifetime.Seeing two unbeaten national powerhouses, playing for the National Championship in the Rose Bowl is the largest possible stage that you could ask for, and it’s an experience that I will always cherish. 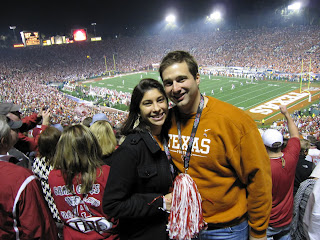 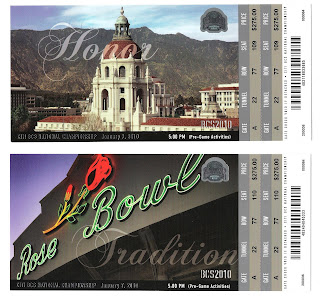 Thanks (again) to our friends Jared and Kimberly.It’s always a good time meeting up with them, and we can always count on their attendance and hospitality at any big UT Football game.

Special thanks to our friend Daron for helping us out with some last minute tickets to the game.It was an incredible kind and generous effort to find these tickets for us, and I am incredibly thankful for this once in a lifetime experience.

Drugs are sumptuous, and certain people cannot get the medicaments they need. Certain drugs are ordinarily used to treat varied types of contagion caused by certain types of bacteria, such as tonsillitis and infections of the throat. If you’re concerned about sexual problem, you probably know about http://isviagraoverthecounter.com/Male-Enhancement-Pills.html. What are side effects of Cialis? There are different drugs for male impotence cure. Very likely Male Enhancement Pills Over the Counter is a very complicated topic. More data about Cialis available at best male enhancement pills over the counter. While the generic is credited with improving nausea, it may also kill the mood in bedroom. All kinds of medications, from those that are mature ‘all natural’ to those that are chemically produced in a laboratory, may cause some kind of aftereffects.