While New Years day used to rule the College Football post season, and arguably represented the best day of sports all year, over the past ten years College Football Bowl Season has changed dramatically. As it stands now, Bowl Season begins on December 18th, and concludes nearly three and a half weeks later on January 10th adding handfuls of new Bowl Games along the way. Not only has the NCAA and BCS failed to remove any controversy in deciding a national champion, but additionally, they have ruined the spectacle that New Years Day once was by spreading the games over such a long window. Add yet another line item to the extensive scroll of BCS incompetence.

The Poinsettia Bowl is one of these newer expansion bowls, tracing its roots back to 2005 as an offshoot from the organizers of the Holiday Bowl. Sponsored by the illustrious San Diego County Credit Union, the Poinsettia Bowl features Navy (when bowl eligible) versus the second place Mountain West Conference finisher, this year being represented by the San Diego State Aztecs. While I would certainly never plan a destination trip around a game like the Poinsettia Bowl, spending Christmas in San Diego with my family would put me in dreary Southern California during bowl season. A quick glance at the calendar revealed I would be flying in the day of the game, and so arose a convenient opportunity to add another college football game to the 2010 Lineup. It also presented a unique occasion to share a game with my sister and measuredly introduce her into the world of College Football.

Fresh off the plane and a belly full of Santana’s burritos, we navigated the disorganized maze of parking at Qualcomm Stadium. Hampered by heavy rains and surprisingly robust tailgaters, my sister and I found our way over to a tailgate hosted by some of her Navy friends. Given the proximity of some rather large Navy bases in the surrounding area, coupled with the home game for the Aztecs, it made for a far larger crowd in the parking lots than I had anticipated. A few adult beverages and handfuls of cookies later, we made our way into the concrete eyesore of Qualcomm Stadium. 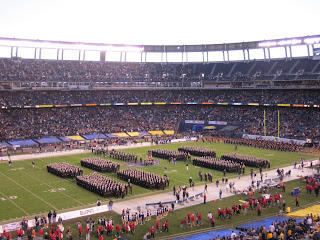 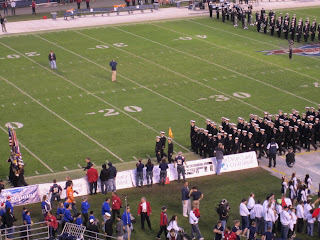 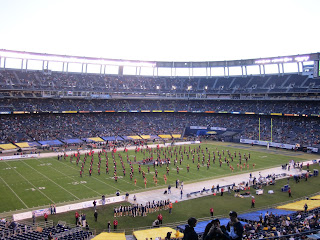 Qualcomm, the turf specifically, was in surprisingly good shape considering the torrential rains and floods that had pervaded San Diego the days before the game. Workers had pumped away over 1.5 million gallons of water off the field to make the surface playable, parts of which were nearly 10 inches underwater only the day before. Ordinarily, one would think the dubious footing would be an advantage for Navy and their grinding triple option rushing attack, but that was not to be the case on this day. Though the Middies still managed 235 yards on the ground, they stumbled in the red zone and struggled to put points on the board. Navy quarterback and Lowe’s Senior Class Award winner Ricky Dobbs toiled to keep any momentum on the Navy attack.

San Diego State on the other hand, a team I admittedly knew little about, was stunningly explosive. Led by phenom freshman running back Ronnie Hillman they torpedoed the Navy defense to the tune of 555 yards, nearly evenly split between rushing and passing. Hillman himself racked up 228 yards and three touchdowns. His blistering ability to hit the corner will no doubt draw comparisons to former Aztec great Marshall Faulk, and as a freshman he’s certainly a talent to keep an eye on. In the end San Diego State ran away with a 35-14 win, securing their first bowl victory since the Pasadena Bowl against Boston University (who no longer fields a football team) back in 1969. Clearly, this was a big win for Aztec fans, though perhaps short lived, as yesterday SDSU head coach Brady Hoke was lured away to the University of Michigan. 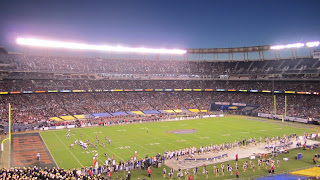 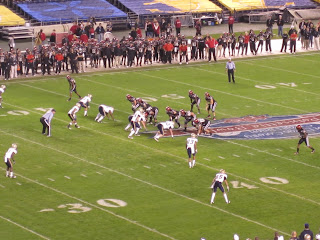 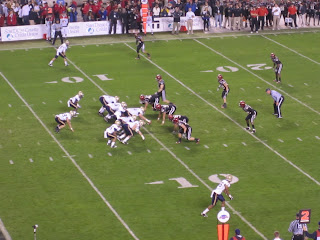 Although it’s certainly not a marquis Bowl, it was great to be able to work the Poinsettia Bowl into my holiday travel plans, and be on hand to introduce my sister to the world of College Football. While it likely won’t turn into quite the same obsession for her, I’m already laying the foundation for a trip to South Bend next year so she can witness a true College Football atmosphere. 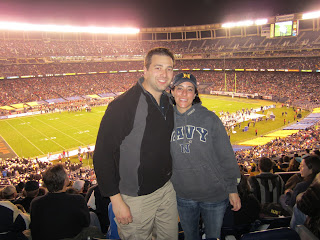 Thank you to my friend Brian for helping us out with a few tickets to the game, and next time perhaps I’ll join you for the Navy pep rally on the USS Midway Aircraft Carrier.

Thank you of course to my sister Rebecca for joining me for the game, and the entire Christmas season in San Diego.