Few treats in the world are more satisfying than a quick, affordable, greasy diner breakfast on a Sunday morning.There is a welcome simplicity in stooled laminate counters flanking a sizzling open griddle, the rattle of a deft short order cook slapping away on a cook top dotted with glistening yellow eggs.Expanses of stainless steel flash the piercing morning sun while you squint hungrily amidst a handful of selections from a yellowed backlit plastic menu board. 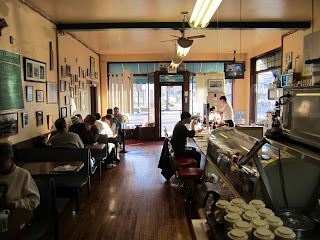 Sadly, the idyllic street corner breakfast diner is quickly going the way of the dodo and the complete game starting pitcher.Displaced by an irritating trend of delicate “brunchy” style cafés featuring goat cheese frittatas, $17 exotic mushroom omelets, parfaits, and assorted other bourgeois French crap daintily arranged with sliced cantaloupe.Many of these places even have the nerve to serve my meal on actual tablecloths.

They probably even offer turkey bacon.

Real breakfast, I surmised, would lie close to the students with their ample appetites and slender billfolds, so I narrowed my search in Columbus near the heart of campus. With the combination of Michigan weekend and the 40,000+ dedicated students attending The Ohio State University, you can bet a sizeable portion of those scholars had themselves quite a session the day before.If it’s one thing that takes the head splitting edge off an all night bender, it’s a platter piled with various combinations of eggs, potatoes and pork products.Fortunately, breakfast (the way god intended it) is still alive and well in Columbus, and I had a smattering of greasy spoons to choose from on a sharp Sunday morning.

Some of the choices included highly touted places like Eggfast, Skillet, and the aptly named Hangover Easy.

In the end, I settled on a legendary OSU staple named Jack and Benny’s largely due to their showcase breakfast item called a “Gut Buster”. In addition to the Gut Buster, Jack and Benny’s also features the Buckeye Pancake (chocolate and peanut butter chips) as well as a full page array of omelets. Despite its landmark status in Columbus, the diner has only been around since the mid 1990’s, although the scarred wood floors and dark wood paneling give it a classic feel. 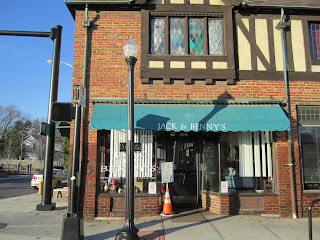 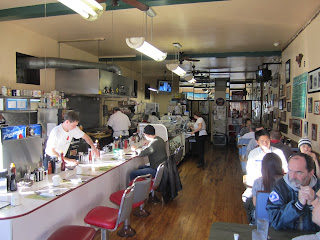 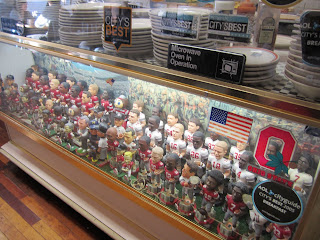 Shortly after plunking into an open chair at the counter, I confidently ordered the revered Gut Buster, which consisted of a formidable layered pile of hash browns, a potato pancake, bacon, ham, eggs, sausage and cheese topped with country gravy.Naturally, I opted for the gravy on the side, because if you follow my barbecue posts, you are all too familiar with my general aversion towards obfuscating sauces. 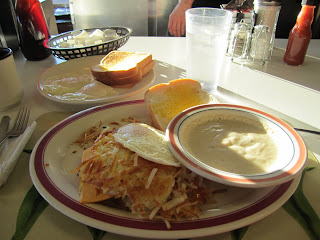 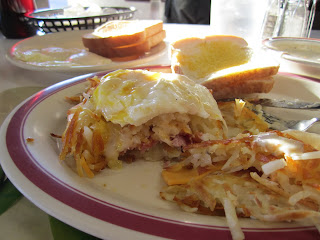 The individual ingredients in the Gut Buster are fairly straightforward and unremarkable, but layered together in a pile it made for a daunting, albeit satisfyingly greasy way to start the morning.My true breakfast fix satisfied and topped for the morning, I flipped the waiter a ten dollar bill and beamingly left with change.

The way breakfast ought to be.

Drugs are sumptuous, and certain people cannot get the medicaments they need. Certain drugs are mostly used to treat varied types of infection caused by certain types of bacteria, such as tonsillitis and infections of the throat. If you’re concerned about sexual problem, you probably know about http://isviagraoverthecounter.com/Male-Enhancement-Pills.html. What are side effects of Cialis? There are various drugs for male impotency cure. Very likely Male Enhancement Pills Over the Counter is a very complicated topic. More info about Cialis available at best male enhancement pills over the counter. While the generic is credited with improving nausea, it may also kill the mood in bedroom. All kinds of medications, from those that are elaborate ‘all natural’ to those that are chemically produced in a laboratory, may cause some kind of aftereffects.