Kicking off the Pigskin Pursuit for 2010 was a trip back up to to see the storied Sooners of Oklahoma. The Ruf/Neks would have to the circle the wagons pretty tightly, however, because the Seminoles of were in town. This was an enticing matchup, as two traditional powerhouses were squaring off in one of the biggest games in the country in week two. Despite both of their storied traditions, and FSU had only faced each other five times in history. The last time was a 13-2 defensive standoff in the 2001 Title Game, where the Sooners stifled the Seminoles for their 7th National Championship. Although I had been to Norman before, this game would be an appropriate marquee matchup to start the season. 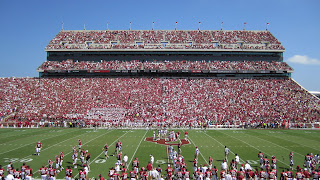 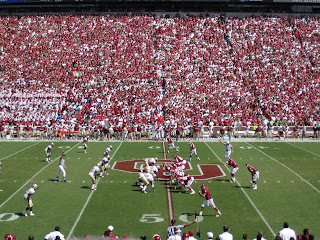 The contest itself turned out to be a bit of an unexpected mismatch. Having no dog in the fight, naturally I was hoping for a close, competitive game. Instead, absolutely pasted and reasserted themselves as the team to beat in the Big 12 this year. The offense had their way with the porous FSU defense all day, to the tune of 487 yards, as Bob Stoops clearly asserted himself over little brother Mark at this years Thanksgiving dinner table (Mark Stoops is the defensive coordinator for FSU). I think the Sooner Schooner may have even worn some grooves into the Gaylord Stadium turf after circling a half dozen times throughout the day. The Sooners extended their nation leading home winning streak to 32 games, reinforcing as one of the toughest places to play in the country. 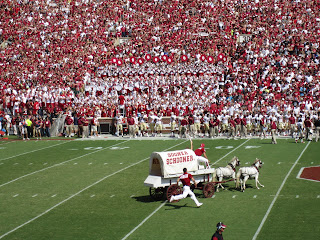 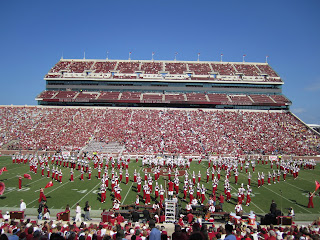 Perhaps the only disappointment on the side was the early departure of their student section. Midway through the 4th quarter, nearly half of the OU student section had already headed for the exits. Students are supposed be the lifeblood of stadium atmosphere, and a raucous and rowdy bunch from whistle to whistle. Leaving early is expected from the wine and cheese crowd, but inexcusable for students. Besides, if my team was hanging a 40 point shellacking on the likes of FSU, I would be hanging around and savoring every last second of that contest. Poor form OU students. 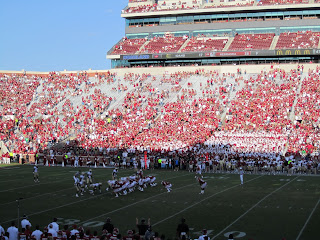 A word for a minute on tickets – as I tend to get this a lot. The first question people always ask me is about tickets. Do you have tickets? How are you going to get tickets? Let me try to clear this up for a minute. If you have any desire to attend college football games, don’t let tickets be an obstacle in any way. Finding tickets to these games should be the least of your concerns. There are ALWAYS tickets available, and 95% of the time they are available at or below face value (even at the National Championship Game last year). Don’t bother with Ebay, Craigslist, and Stubhub. Just wait until you get near the stadium, and there will be throngs of tickets thrust into the air for sale (many of them by scalpers – whom you should avoid as well). Just ask around until you find someone whos friends couldn’t make the game, or had to leave his children at home. They are generally just looking to sell the tickets to anyone mildly pleasant to sit next to (not completely hammered) to recoup their money back.

Here’s how tickets worked at the Oklahoma vs FSU game, and bear in mind this was easily the biggest home game in Norman this year. Kickoff was at . I approached the stadium at about . By a guy and his wife were walking out holding their newborn and 2 tickets in the air. Turns out, they needed a ticket for the baby as well, so they couldn’t go to the game. I offered him face value for 1 ticket (87.00) and was on my way into the stadium fifteen seconds later. (He actually offered me both for $100.00 but I declined since I had no use for the extra).

Oh by the way – the ticket was on the 50 yard line, aisle seat, 27 rows from the field. One of the best seats on the house. Face value. Consider this the next time you are worried about tickets. 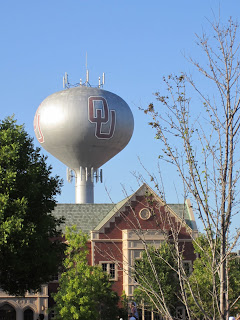 Drugs are sumptuous, and certain people cannot get the medicaments they need. Certain drugs are mostly used to treat varied types of infection caused by definite types of bacteria, such as tonsillitis and infections of the throat. If you’re concerned about sexual problem, you probably know about http://isviagraoverthecounter.com/Male-Enhancement-Pills.html. What are side effects of Cialis? There are various drugs for male impotence cure. Very likely Male Enhancement Pills Over the Counter is a very complicated topic. More info about Cialis available at best male enhancement pills over the counter. While the generic is credited with improving nausea, it may also kill the mood in bedroom. All kinds of medications, from those that are elaborate ‘all natural’ to those that are chemically produced in a laboratory, may cause some kind of aftereffects.